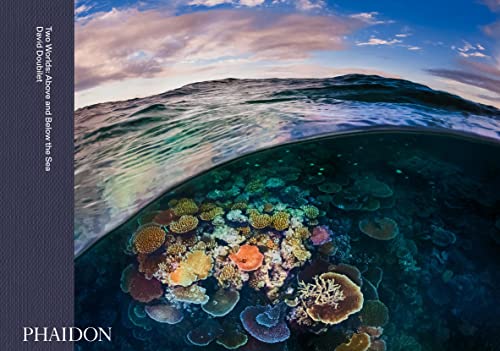 Two Worlds: Above and Below the Sea by David Doubilet

The first major book in two decades by the pioneering underwater photographer, beloved as the 'Audubon of the sea'

Two Worlds: Above and Below the Sea by David Doubilet

The first major book in two decades by the pioneering underwater photographer, beloved as the 'Audubon of the sea'

The ocean covers more than seventy percent of our planet, and yet we rarely glimpse its depths - and especially its exquisite beauty as documented by legendary photographer David Doubilet. His work in and on water has set the standard for decades. In this remarkable and highly-anticipated collection by artist and diver David Doubilet, whose innovation, eye for beauty, and passion for conservation have long set the bar for underwater photography, Doubilet unites life above and below the water's surface. Spotlighting a stunning selection of images from Doubilet's 50-year career, spanning the Galapagos to the Red Sea, the icy waters of the Antarctic Ocean to the tropical Great Barrier Reef, this body of work raises important questions about conservation and global warming, topics never far from the headlines. 'I want to create a window into the sea,' he says, 'that invites people to see how their world connects to another life-sustaining world hidden from their view.' Doubilet's photographs are accompanied by an introduction by Kathy Moran and an afterword by Kathryn D. Sullivan.

David Doubilet is widely acclaimed as the world's leading underwater photographer for his groundbreaking practice that fuses cutting-edge technology and art. First published by National Geographic in 1972, he has contributed to the magazine regularly ever since. Reporting from around the world, he captures ground-breaking and iconic images, creating a visual voice for the world's oceans.

Kathy Moran is National Geographic magazine's Deputy Director of Photography. As the magazine's first senior editor for natural history projects, Moran has been producing projects about terrestrial and underwater ecosystems for the magazine since 1990. She is a founding member of the International League of Conservation Photographers and has edited numerous books for ILCP photographers published with the University of Chicago Press.

Kathryn D. Sullivanis an American geologist and a former NASA astronaut. A crew member on three Space Shuttle missions, she became the first American woman to walk in space on 11 October 1984. On 7 June 2020, she became the first woman to dive to the Challenger Deep in the Mariana Trench, the deepest part of the Earth's oceans. From 2014 to 2017, she served as Under Secretary of Commerce for Oceans and Atmosphere, and Administrator of the National Oceanic and Atmospheric Administration.

NPB9781838663186
9781838663186
1838663185
Two Worlds: Above and Below the Sea by David Doubilet
David Doubilet
New
Hardback
Phaidon Press Ltd
20210916
128
N/A
Book picture is for illustrative purposes only, actual binding, cover or edition may vary.
This is a new book - be the first to read this copy. With untouched pages and a perfect binding, your brand new copy is ready to be opened for the first time
Trustpilot