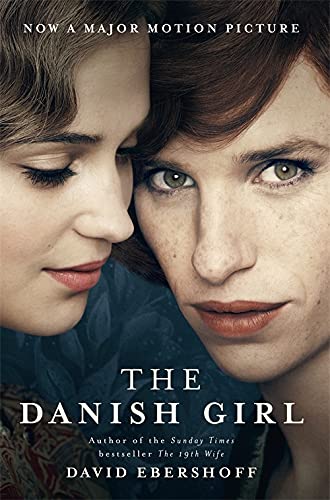 The Danish Girl
by David Ebershoff

In Stock
£3.99
Now a major motion picture starring Eddie Redmayne and directed by Tom Hooper, THE DANISH GIRL is a shockingly original novel about one of the most unusual and passionate love stories of the 20th century.
Like New Very Good Good
8 in stock

The Danish Girl by David Ebershoff

Loosely inspired by a true story, this tender portrait of marriage asks: What do you do when the person you love has to change?

It starts with a question, a simple favour asked by a wife of her husband while both are painting in their studio, setting off a transformation neither can anticipate. Uniting fact and fiction into an original romantic vision, The Danish Girl eloquently portrays the unique intimacy that defines every marriage and the remarkable story of Lili Elbe, a pioneer in transgender history, and the woman torn between loyalty to her marriage and her own ambitions and desires.

The Danish Girl is an evocative and deeply moving novel about one of the most passionate and unusual love stories of the 20th century.

This is a curiously touching tale, told in a lucid and sensitive style * SUNDAY TELEGRAPH *
An enthralling read * THE TIMES *
A beautifully written novel . . . elegant, assured and intelligent * DAILY EXPRESS *
The intelligence and tactfulness of his exploration of [love] makes his novel a noteworthy event * NEW YORK TIMES *
A first novel of startling refinement and beauty * Chicago Tribune *
Heartbreaking and unforgettable, it is a complete triumph * Boston Globe *
Beautifully written. It is absolutely engrossing . . . [an] elegant, assured and intelligent tale; as a first noivel, it is astounding * SUNDAY EXPRESS *
Intriguing and captivating . . . a resonant fable about metamorphosis and the construction of identity. This admirable book deserves to find a wide readership * DAILY TELEGRAPH *
Be enchanted by THE DANISH GIRL . . . elegant and sensitive writing * ELLE *
[An] affecting and graceful debut * NEW STATESMAN *
The book is a sensuous treat, its symbolic visual imagery combining with mesmeric recreations of period and place . . . Einar and his wife are treated with sympathy, and a potentially sensational or bizarre subject is treated with dignity * ART NEWSPAPER *
This is a curiously touching take, told in lucid and sensitive style that shows great insight into an extraordinary predicament . . . an engrossing story of true love, suffering and sacrifice * SUNDAY TELEGRAPH *

David Ebershoff is the author of THE ROSE CITY, PASADENA, THE 19TH WIFE and THE DANISH GIRL, which has been made into a film starring Academy Award-winner Eddie Redmayne and directed by the Academy Award-winning director of THE KING'S SPEECH, Tom Hooper. His books have been translated into twenty languages and honoured by the American Academy of Arts and Letters, the Lambda Literary Foundation and the American Library Association. He has taught writing at Princeton, NYU and Columbia, and was Vice President and Executive Editor at Random House for many years.

GOR007193929
The Danish Girl by David Ebershoff
David Ebershoff
Used - Very Good
Paperback
Orion Publishing Co
2015-12-03
336
147460157X
9781474601573
N/A
Book picture is for illustrative purposes only, actual binding, cover or edition may vary.
This is a used book - there is no escaping the fact it has been read by someone else and it will show signs of wear and previous use. Overall we expect it to be in very good condition, but if you are not entirely satisfied please get in touch with us.