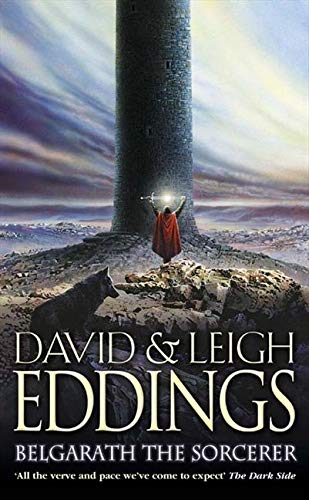 Belgarath the Sorcerer
by David Eddings

The life story of Belgararth the Sorcerer: his own account of the great struggle that went before the Belgariad and the Malloreon, when gods stills walked the land.

Belgarath the Sorcerer by David Eddings

The life story of Belgararth the Sorcerer: his own account of the great struggle that went before the Belgariad and the Malloreon, when gods stills walked the land.

Here is the full epic story of Belgarath, the great sorcerer learned in the Will and the Word on whom the fate of the world depends. Only Belgarath can tell of those near-forgotten times when Gods still walked the land: he is the Ancient One, the Old Wolf, his God Aldur's first and most-favoured disciple. Using powers learned over the centuries Belgarath himself records the story of conflict between two mortally opposed Destinies that split the world asunder.

A hugely entertaining work of great daring, wit, grandeur and excitement that confirms the role of Belgarath the Sorcerer as one of the mightiest fantasy creations of the century.

'Nobody writes modern fantasy like Eddings or as well ... Eddings is at the top with the very best' Vector'

`My ideal summer read... Having enjoyed the entire ten-book serial, I was delighted to be able to read this latest addition as it not only provides fantastic escapism in itself, but, being a prequel, will make my re-reading of the other books all the more fascinating.' The Irish Times

`Offers an absorbing storyline and some memorable characters as, once again, the authors touch all the right fantasy bases, with warring gods, political intrigues, supernatural creatures and appealingly human magicians involved in a titanic war over the course of seven millennia. Eddings fans will no doubt snatch this novel off the shelves while readers new to the authors' world won't find a more appropriate place to begin exploring it.'
Publishers Weekly

`There's no denying the Eddingses' offerings do entertain. This novel is for fantasy fans fed up with more fusty fare, or for anyone who likes mischief and merriment.'
West Australian

GOR001441030
Belgarath the Sorcerer by David Eddings
David Eddings
Used - Very Good
Paperback
HarperCollins Publishers
2006-05-02
848
0007217099
9780007217090
N/A
Book picture is for illustrative purposes only, actual binding, cover or edition may vary.
This is a used book - there is no escaping the fact it has been read by someone else and it will show signs of wear and previous use. Overall we expect it to be in very good condition, but if you are not entirely satisfied please get in touch with us.