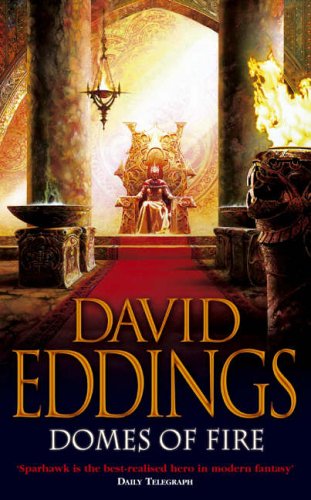 Domes of Fire
by David Eddings

Begins a new David Eddings trilogy, set a few years after the events of The Elenium...

Domes of Fire: Book One of The Tamuli by David Eddings

Begins a new David Eddings trilogy, set a few years after the events of The Elenium...

At the conclusion of The Elenium the company of Pandion Knights led by Sir Sparhawk, having freed Queen Ehlana of Elenia from the spell that threatened her life, had marched on Zemoch, routed their enemies and defeated or destroyed the evil god Azash. Sparhawk returned to Elenia, where he and Ehlana were married.

But their peaceful reign is destined not to last long. A few years later, in the Tamul Empire far to the east, unrest is brewing which threatens the nation's stability. Investigations show that the trouble is clearly of paranormal origin, and suspicion at first falls upon the Styrics. These suspicions prove unfounded, and indeed it is the pre-eminent Styric magician Zalasta who suggests that the Empire look westwards for assistance in solving their problems... specifically, to the legendary warrior Sparhawk.

GOR001203858
Domes of Fire: Book One of The Tamuli by David Eddings
David Eddings
Used - Very Good
Paperback
HarperCollins Publishers
2006-01-03
448
0007217064
9780007217069
N/A
Book picture is for illustrative purposes only, actual binding, cover or edition may vary.
This is a used book - there is no escaping the fact it has been read by someone else and it will show signs of wear and previous use. Overall we expect it to be in very good condition, but if you are not entirely satisfied please get in touch with us.