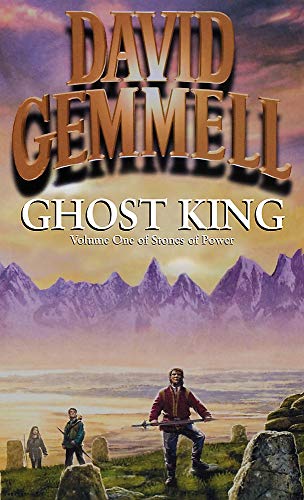 Rebellion and invasion plunge Britannia into the Dark Ages. Chaos and terror stalk the land, the King slain by traitors, the great Sword of Power vanished beyond the Circle of Mist.

Saxons, Angles, Jutes and Brigante tribesman mass together to destroy the realm, aided by the powers of the Witch Queen and the Lord of the Undead. Against them stands a weakling boy, and an old mountain warrior.

But the boy has the blood of kings, and the warrior is Culain, the legendary Lord of the Lance. And he alone knows the dread secret of the Witch Queen.

David Gemmell's first novel, LEGEND was published in 1984, beginning his acclaimed Drenai saga. He was widelyregarded as Britain's king of heroic fantasy. He died in July 2006.

GOR000902798
Ghost King by David Gemmell
David Gemmell
Sipstrassi: Stones of Power
Used - Very Good
Paperback
Little, Brown Book Group
1988-10-20
336
1857236424
9781857236422
N/A
Book picture is for illustrative purposes only, actual binding, cover or edition may vary.
This is a used book - there is no escaping the fact it has been read by someone else and it will show signs of wear and previous use. Overall we expect it to be in very good condition, but if you are not entirely satisfied please get in touch with us.