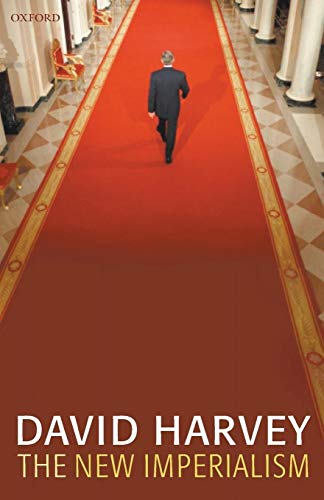 The New Imperialism
by David Harvey

In Stock
£13.99
Is it a sign of strength or of weakness that the US has suddenly shifted from a politics of consensus to one of coercion on the world stage? What was really at stake in the war on Iraq? Dealing with these questions, this book aims to build a conceptual framework to expose the underlying forces at work behind these momentous shifts in US policies.
Good
Only 1 left

The New Imperialism by David Harvey

People around the world are confused and concerned. Is it a sign of strength or of weakness that the US has suddenly shifted from a politics of consensus to one of coercion on the world stage? What was really at stake in the war on Iraq? Was it all about oil and, if not, what else was involved? What role has a sagging economy played in pushing the US into foreign adventurism and what difference does it make that neo-conservatives rather than neo-liberals are now in power? What exactly is the relationship between US militarism abroad and domestic politics? These are the questions taken up in this compelling and original book. Closely argued but clearly written, 'The New Imperialism' builds a conceptual framework to expose the underlying forces at work behind these momentous shifts in US policies and politics. The compulsions behind the projection of US power on the world as a 'new imperialism' are here, for the first time, laid bare for all to see. This new paperback edition contains an Afterword written to coincide with the result of the 2004 American presidental election.

Review from previous edition 'The New Imperialism' merits the widest possible public. David Harvey is a social theorist known for a cool, analytical style born of interdisciplinary inquiry, coupled with a keen feeling for political significance. This book showcases his talent.' * The Boston Phoenix *
'Harvey makes an important theoretical contribution to understanding contemporary empire's vicissitudes.' * The Times Higher Education Supplement *
'This book is beautifully crafted, its prose accessible, its narrative one of mounting intensity and urgency. 'The New Imperialism' mounts a stunning indictment of our present institutions of power, while offering hopeful insights about how these institutions could be changed.' * Richard Sennett, Professor of Sociology, London School of Economics *
'Navigating effortlessly between history, economics, geography and politics, with persuasive argument and lucid prose, David Harvey places today's headlines in context and makes sense of the early twenty-first century maelstrom we're all caught up in. His concept of accumulation by dispossession will go far. 'The New Imperialism' is a truly useful book.' * Susan George, Associate Director, The Transnational Institute, Amsterdam *

GOR002815870
The New Imperialism by David Harvey
David Harvey
Clarendon Lectures in Geography and Environmental Studies
Used - Good
Paperback
Oxford University Press
2005-02-24
288
0199278083
9780199278084
N/A
Book picture is for illustrative purposes only, actual binding, cover or edition may vary.
The book has been read but remains in clean condition. All pages are intact and the cover is intact. Some minor wear to the spine.