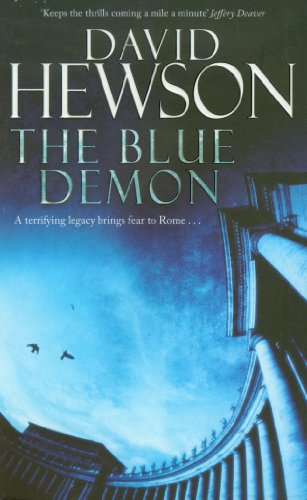 The Blue Demon
by David Hewson

In Stock
£5.99
Murder and mystery set in Rome. The eighth in the Nic Costa series.
Very Good
Only 1 left

The Blue Demon by David Hewson

Twenty years ago, a mysterious group called the Blue Demon committed a series of bizarre and ritualistic crimes evoking the legacy of the lost race of the Etruscans, and leaving in their wake a group of dead students, a murdered couple, a cryptic message and a kidnapped child.

Now, the leaders of the G8 are descending on Rome for a summit at the QuirinalePalace. But when a politician is found ritually murdered, seemingly by a strange young man dressed as an Etruscan god, detective Nic Costa suspects that the old case was never really solved. The Blue Demon appear to have returned - and planning, under the leadership of the fanatical Andrea Petrakis, to unleash a devastating sequence of attacks on the city.

While a massive security force patrols Rome's streets - usually bustling but now reduced to a deserted hush - the atmosphere grows increasingly tense. Officially sidelined from the investigation, but encouraged by the wily elderly Italian President, Dario Sordi, Costa and his maverick team start to dig deeper into the past. There are still too many questions left unanswered - and much more to the history of the Blue Demon than anyone wants to admit . . .

GOR002824152
The Blue Demon by David Hewson
David Hewson
Used - Very Good
Paperback
Pan Macmillan
2010-08-06
512
0330519034
9780330519038
N/A
Book picture is for illustrative purposes only, actual binding, cover or edition may vary.
This is a used book - there is no escaping the fact it has been read by someone else and it will show signs of wear and previous use. Overall we expect it to be in very good condition, but if you are not entirely satisfied please get in touch with us.