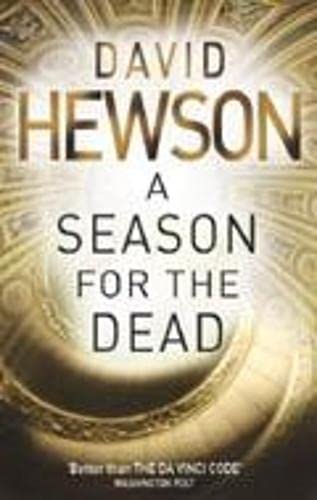 A Season for the Dead
by David Hewson

In Stock
£5.49
A shooting in the silent Vatican reading room. And the worst is yet to come . . .
Like New Very Good Good
Only 3 left

A Season for the Dead Summary

A Season for the Dead by David Hewson

'Stefano's left arm, the one holding the weapon, swept the table, swept everything on it . . . She was quiet, waiting, which was, his eyes seemed to say, what he wanted. Then Stefano lifted up the bag to the height of the desk, turned it upside down, let the contents fall on the table and said, 'The blood of the martyrs is the seed of the Church." '

Whilst Sara Farnese pours over ancient texts in the silent Vatican reading room, a brutal murder is taking place in a nearby church. Then suddenly a crazed man enters the Vatican carrying a bloodied bag. He walks up to Sara's desk. He has something he would like her to see . . .

Soon Sara us inextricably linked to a series of horrific and cunning murders, each one representative of the death of a martyr of the Church. Into this climate enter Detectives Costa and Rossi, enlisted to track down the killer, and to protect Sara from the horrors he is capable of. It seems that at any time she could be the next chosen sacrifice . . .

David Hewson was born in Yorkshire in 1953. He worked as staff writer on THE TIMES from 1978, and has written five novels, as well as several travel books. He is now a weekly columnist for the SUNDAY TIMES. His second novel in the Nic Costa series will be THE VILLA OF MYSTERIES, and will be published in April 2004. David lives in Kent.

GOR000750277
A Season for the Dead by David Hewson
David Hewson
Used - Very Good
Paperback
Pan Macmillan
2004-04-02
480
0330493639
9780330493635
N/A
Book picture is for illustrative purposes only, actual binding, cover or edition may vary.
This is a used book - there is no escaping the fact it has been read by someone else and it will show signs of wear and previous use. Overall we expect it to be in very good condition, but if you are not entirely satisfied please get in touch with us.