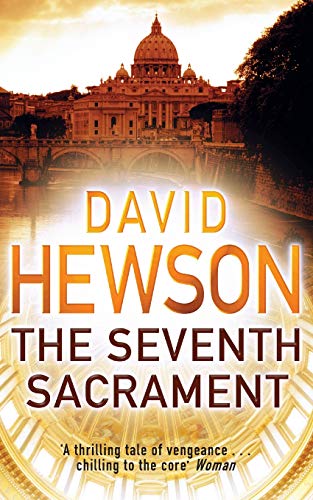 The Seventh Sacrament
by David Hewson

In Stock
£4.49
Murder and mystery set in Rome, The Seventh Sacrament is the fifth title in the Nic Costa series, David Hewson's stunning Italian crime novels.
Very Good
Only 2 left

The Seventh Sacrament by David Hewson

The Seventh Sacrament is the fifth in the Nic Costa series, David Hewson's detective novels of love and death in Italy.

There's an entire underground city down there . . . houses and temples, entire streets. I talked to a couple of the cavers Leo called in. They hero-worshipped Giorgio. The man had been to places the rest of them could only dream about.

Giorgio Bramante, a Roman archaeology professor, was master of the hidden world beneath the earth - until the day he lost his young son, Alessio, to a group of students intent on re-creating a centuries-old ritual to a long-banished god. His rage knew no bounds and, in a frenzy, he beat one of the students to death.

Released from prison fourteen years later, Giorgio is bent upon a terrifying revenge on all those he blames for the loss of his son. Inspector Leo Falcone, a member of the original investigating team, is one of his targets.

And Nic Costa, watching Falcone move relentlessly into the man's merciless grip, realizes the answer must lie in solving a cold case that, like the forgotten Alessio Bramante, has long been regarded as dead and buried for good.

"Intricate.... [With a] poignant resolution few readers will anticipate."--"Publishers Weekly"

David Hewson was born in Yorkshire in 1953. He has worked for The Times, Independent and Sunday Times as a journalist, and has written numerous novels, as well as several travel books. David Hewson's European crime and mystery books range from the Copenhagen of The Killing and Sarah Lund to the Italy of Nic Costa and the Amsterdam of Pieter Vos. David lives in Kent.

GOR000412098
The Seventh Sacrament by David Hewson
David Hewson
Nic Costa
Used - Very Good
Paperback
Pan Macmillan
2007-08-01
544
0330435957
9780330435956
N/A
Book picture is for illustrative purposes only, actual binding, cover or edition may vary.
This is a used book - there is no escaping the fact it has been read by someone else and it will show signs of wear and previous use. Overall we expect it to be in very good condition, but if you are not entirely satisfied please get in touch with us.