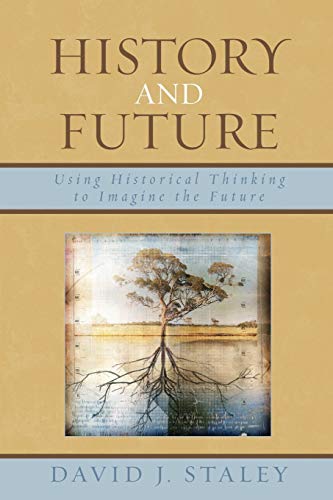 In Stock
£16.99
The book reexamines this long held belief, and argues that the historical method is an excellent way to think about and represent the future. At the same time, the book asserts that futurists should not view the future as a scientist might--aiming for predictions and certainties--but rather should view the future in the same way that an historian views the past.
Very Good
Only 1 left

Perhaps the most important histiographic innovation of the twentieth century was the application of the historical method to wider and more expansive areas of the past. Where historians once defined the study of history strictly in terms of politics and the actions and decisions of Great Men, historians today are just as likely to inquire into a much wider domain of the past, from the lives of families and peasants, to more abstract realms such as the history of mentalities and emotions. Historians have applied their method to a wider variety of subjects; regardless of the topic, historians ask questions, seek evidence, draw inferences from that evidence, create representations, and subject these representations to the scrutiny of other historians. This book severs the historical method from the past altogether by applying that method to a domain outside of the past. The goal of this book is to apply history-as-method to the study of the future, a subject matter domain that most historians have traditionally and vigorously avoided. Historians have traditionally rejected the idea that we can use the study of history to think about the future. The book reexamines this long held belief, and argues that the historical method is an excellent way to think about and represent the future. At the same time, the book asserts that futurists should not view the future as a scientist might-aiming for predictions and certainties-but rather should view the future in the same way that an historian views the past.

This book includes a fascinating discussion of human social dynamics, as they are shaped by our mental models, our biases and our imagination. The analysis of the patterning concepts and inferences we use to impose meaning on our past and future is especially interesting, especially in the context of scenario construction. -- Timothy C. Mack, president, World Future Society
History and Future is a very clearly written book that takes a counterintuitive idea, the history of the future,and shows that it can be not only intellectually respectable but a very useful endeavor. The book carries one along because of its lucidity, the way it relates and uses these ideas, and the manner in which it connects them to real-world examples and problems. The result is something that is entirely persuasive and quite illuminating. -- Brian Fay, William Griffin Professor of Philosophy, Wesleyan University

David J. Staley is the director of the Harvey Goldberg Program for Excellence in Teaching at The Ohio State University, and principal of The DStaley Group (www.dstaleygroup.com).

GOR010209987
History and Future: Using Historical Thinking to Imagine the Future by David J. Staley
David J. Staley
Used - Very Good
Paperback
Lexington Books
2010-02-19
187
0739117548
9780739117545
N/A
Book picture is for illustrative purposes only, actual binding, cover or edition may vary.
This is a used book - there is no escaping the fact it has been read by someone else and it will show signs of wear and previous use. Overall we expect it to be in very good condition, but if you are not entirely satisfied please get in touch with us.