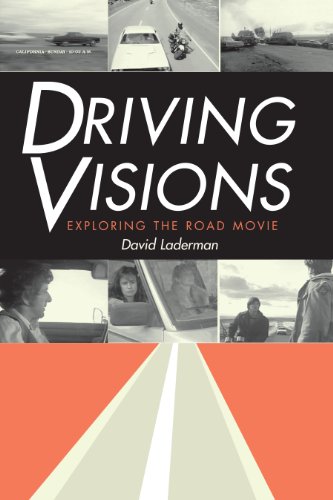 In Stock
£21.99
Traces the generic evolution of the road movie with respect to its diverse presentations, emphasising it as an "independent genre" that attempts to incorporate marginality and subversion on many levels.
Very Good
Only 1 left

From the visionary rebellion of Easy Rider to the reinvention of home in The Straight Story, the road movie has emerged as a significant film genre since the late 1960s, able to cut across a wide variety of film styles and contexts. Yet, within the variety, a certain generic core remains constant: the journey as cultural critique, as exploration beyond society and within oneself.

This book traces the generic evolution of the road movie with respect to its diverse presentations, emphasizing it as an "independent genre" that attempts to incorporate marginality and subversion on many levels. David Laderman begins by identifying the road movie's defining features and by establishing the literary, classical Hollywood, and 1950s highway culture antecedents that formatively influenced it. He then traces the historical and aesthetic evolution of the road movie decade by decade through detailed and lively discussions of key films. Laderman concludes with a look at the European road movie, from the late 1950s auteurs through Godard and Wenders, and at compelling feminist road movies of the 1980s and 1990s.

"This is a superbly conceived, thoughtfully organised, and well-written study of a subject--the 'road movie'--that has lacked anything close to a coherent, book-length overview... It will make an ideal course text and should also have a wide appeal to non-academic readers." Scott Simmon, author of The Films of D. W. Griffith and King Vidor, American

David Laderman is Associate Professor of Film at the College of San Mateo, as well as a lecturer in the Cinema Department at San Francisco State University.

GOR004677808
Driving Visions: Exploring the Road Movie by David Laderman
David Laderman
Used - Very Good
Paperback
University of Texas Press
2002-06-15
334
0292747322
9780292747326
N/A
Book picture is for illustrative purposes only, actual binding, cover or edition may vary.
This is a used book - there is no escaping the fact it has been read by someone else and it will show signs of wear and previous use. Overall we expect it to be in very good condition, but if you are not entirely satisfied please get in touch with us.