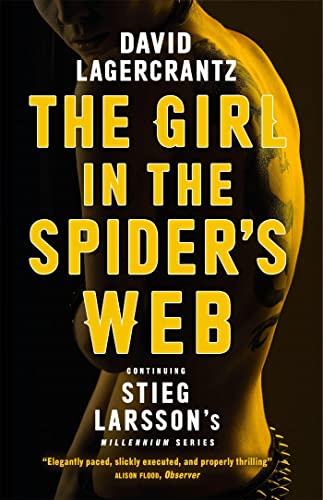 The Girl in the Spider's Web is book four in the Millennium series. Book five, The Girl Who Takes an Eye for an Eye, was published in September 2017.

The Girl Who Lived Twice - the final novel in the series by David Lagercrantz - is available to preorder now.

David Lagercrantz was born in 1962, and is an acclaimed author and journalist. In 2015 The Girl in the Spider's Web, his continuation of Stieg Larsson's Millennium Trilogy, became a worldwide bestseller and was made into a film by Sony Pictures (2018). He is the author of the acclaimed and bestselling I am Zlatan Ibrahimovic, Fall of Man in Wilmslow, and the fifth in the Millennium series, The Girl Who Takes an Eye for an Eye. George Goulding was born in Stockholm, educated in England, and spent his legal career working for a London-based law firm. He is now a translator of Swedish literature into English, including David Lagercrantz's continuations of the Millennium trilogy by Stieg Larsson.

GOR007370964
The Girl in the Spider's Web: Continuing Stieg Larsson's Dragon Tattoo Series by David Lagercrantz
David Lagercrantz
a Dragon Tattoo story
Used - Very Good
Paperback
Quercus Publishing
2016-04-07
496
1848667787
9781848667785
Short-listed for Petrona Award for the Best Scandinavian Crime Novel of the Year 2016
Book picture is for illustrative purposes only, actual binding, cover or edition may vary.
This is a used book - there is no escaping the fact it has been read by someone else and it will show signs of wear and previous use. Overall we expect it to be in very good condition, but if you are not entirely satisfied please get in touch with us.