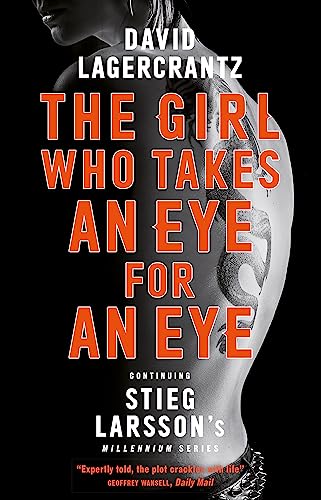 Used Price
£3.99
New RRP £8.99
Free Shipping in the UK
The fifth in the Millennium series that began with The Girl with the Dragon Tattoo - the global publishing phenomenon.
Reviews:
Trustpilot
Very Good Good Well Read

The Girl Who Takes an Eye for an Eye: Continuing Stieg Larsson's Dragon Tattoo series by David Lagercrantz

THE GIRL WITH THE DRAGON TATTOO LIVES ON.

Lisbeth Salander is an unstoppable force:

Sentenced to two months in Flodberga women's prison for saving a young boy's life by any means necessary, Salander refuses to say anything in her own defence. She has more important things on her mind.

Some fictional characters prove too popular to die . . . Such is the case with Lisbeth Salander . . . Lagercrantz is doing a wonderful job. It would be hard to imagine a sequel more faithful to its work of origin than this one, which emulates the spirit and the style of the original trilogy. -- Tom Nolan * Wall Street Journal *
Expertly told, the plot crackles with life -- Geoffrey Wansell * Daily Mail *
Lagercrantz's latest Salander novel, is even bolder - if somewhat more fantastical . . . Larsson had grand ambitions for his Millennium series, projecting a total of 10 novels. In Lagercrantz's hands, the series is realizing grand ambitions of another sort . . . The Girl Who Takes an Eye for An Eye intensifies the mythic elements of Larsson's vision. -- Maureen Corrigan * Washington Post *
Lagercrantz doesn't falter in the mayhem department . . . Larsson fans certainly won't be disappointed. * Kirkus Reviews *
Lagercrantz's excellent second contribution to Stieg Larsson's Millennium series . . . twisting plot lines tie together in this complicated, fascinating mystery. As a bonus, readers learn the meaning of the dragon tattoo on Lisbeth's back. * Publishers Weekly *
Lagercrantz's compassion for the underdog adds genuine emotion to his baroque plotting. There is much to admire in the way he has grasped a tricky assignment - to continue one of the big-gest hits of recent years. Roll on the next "girl" -- James Kidd * South China Morning Post *

David Lagercrantz was born in 1962, and is an acclaimed author and journalist. In 2015 The Girl in the Spider's Web, his continuation of Stieg Larsson's Millennium Trilogy, became a worldwide bestseller and was made into a film by Sony Pictures (2018). He is the author of the acclaimed and bestselling I am Zlatan Ibrahimovic, Fall of Man in Wilmslow, and the fifth in the Millennium series, The Girl Who Takes an Eye for an Eye. George Goulding was born in Stockholm, educated in England, and spent his legal career working for a London-based law firm. He is now a translator of Swedish literature into English, including David Lagercrantz's continuations of the Millennium trilogy by Stieg Larsson.

GOR009054052
The Girl Who Takes an Eye for an Eye: Continuing Stieg Larsson's Dragon Tattoo series by David Lagercrantz
David Lagercrantz
a Dragon Tattoo story
Used - Very Good
Paperback
Quercus Publishing
2018-03-27
448
0857056433
9780857056436
N/A
Book picture is for illustrative purposes only, actual binding, cover or edition may vary.
This is a used book - there is no escaping the fact it has been read by someone else and it will show signs of wear and previous use. Overall we expect it to be in very good condition, but if you are not entirely satisfied please get in touch with us.