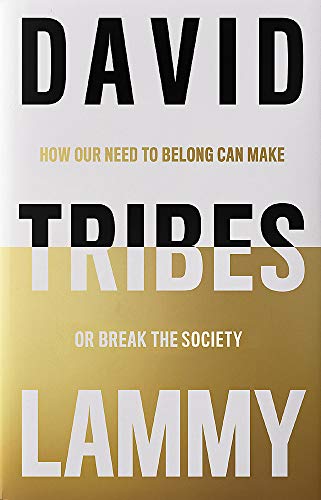 Out of Stock
£19,99
Both memoir and call-to-arms, Tribes explores both the benign and malign effects of our need to belong.
New£19,99
Only 0 left

Tribes: How Our Need to Belong Can Make or Break Society by David Lammy

'A superb book about the tribalism gripping British politics. Tribes is measured, searching, pitilessly self-scrutinising and would probably amaze anyone who knows its author only from his Twitter persona' Decca Aitkenhead, Sunday Times

David was the first black Briton to study at Harvard Law School and practised as a barrister before entering politics. He has served as the Member of Parliament for Tottenham since 2000. Today, David is one of Parliament's most prominent and successful campaigners for social justice. He led the campaign for Windrush British citizens to be granted British citizenship and has been at the forefront of the fight for justice for the families affected by the Grenfell Tower fire.

In 2007, inspired by the bicentenary of the Abolition of the Slave Trade Act and looking to explore his own African roots, David Lammy took a DNA test. Ostensibly he was a middle-aged husband & father, MP for Tottenham and a die-hard Spurs fan. But his nucleic acids revealed that he was 25% Tuareg tribe (Niger), 25% Temne tribe (Sierra Leone), 25% Bantu tribe (South Africa), with 5% traces of Celtic Scotland and a mishmash of other unidentified groups.

Both memoir and call-to-arms, Tribes explores both the benign and malign effects of our need to belong. How this need - genetically programmed and socially acquired - can manifest itself in positive ways, collaboratively achieving great things that individuals alone cannot. And yet how, in recent years, globalisation and digitisation have led to new, more pernicious kinds of tribalism. This book is a fascinating and perceptive analysis of not only the way the world works but also the way we really are.

Lammy writes with nuance and sensitivity and accepts the lack of easy answers. But his core message is simple. We must cooperate more, compromise more, communicate more. Only connect, but offline * Prospect *
A superb book about the tribalism gripping British politics. Tribes is measured, searching, pitilessly self-scrutinising and would probably amaze anyone who knows its author only from his Twitter persona * Sunday Times *
Episodes of memoir, including DNA tests, a police frisking and a death threat, enliven the Labour MP's first-rate study of social division * Guardian *
It is rich, in thought, history, anecdote and experience * The New European *
The best section of the book is a sympathetic account of why people voted Brexit from a zealous Remainer MP who insists Brexit is driven by xenophobia * Evening Standard *
Tribes examines how to bring together a fractious country without smothering legitimate political grievances in the process * Guardian *
Absorbing analysis . . . thoughtful, nuanced book . . . this book asks the right questions * Observer *

Blends memoir with shrewd analysis of the current political landscape . . . He interrogates subjects such
as polarisation, tribalism and identity politics with aplomb, bringing in voices from opposing backgrounds
and views . . . The most powerful parts of the book, though, are the explorations of his own compulsion to belong

A fascinating and thought-provoking reflective journey across cultures, centuries and continents. This book
will become a classic and an important tool for anyone studying social and political history and the rapidly changing dynamics of tribalism

David Lammy was born in London to Guianese parents and has served as the MP for Tottenham since 2000. He was the first black Briton to study at Harvard Law School and before entering politics practised as a barrister. He served as a minister under Tony Blair and Gordon Brown and his first book, Out of the Ashes: Britain after the Riots, was published to widespread acclaim in 2011.