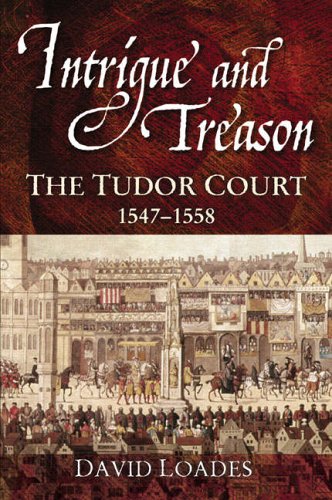 Intrigue and Treason
by David Loades

In Stock
£8.99
Pursues the Kings and Queens of sixteenth century through an unprecedented period of upheaval when there was no adult male to take the throne. Through an original study of both the politics and culture of the age, this book shows how the monarchy and state adapted to a completely new form of rule: that of women and children.
Very Good Good
Only 1 left

With Elizabeth and Henry VIII dominant, the Tudor world still captures the popular imagination today. Yet how did the court change from Henry's ruggedly masculine environment to Elizabeth's feminine world? This book meticulously analyses events from the school room of Edward, through Mary and Philip's reign and right through to the era of Elizabeth's loving virgin circle. It charts how the court changed through a series of plots, affairs and religious rollercoasters that sent seismic waves reaching to the heart of the royal family.For readers interested in the early monarchy.

'This is a penetrating and colourful study of the mid-Tudor Court. Loades has responded to both the revived interest in Edwardian and Marian politics and the current fascination with the Court to explore and demonstrate the role of the royal home as a political arena and the heart of government. He also provides fresh, stimulating and important assessments of Philip, Elizabeth and other focal figures.'

'...an excellent survey of the most difficult period of Tudor history.'

'...well worth reading for those with an interest in Tudor England, or more broadly, Renaissance monarchy in Europe.'

David Loades is Honorary Research Professor at the University of Sheffield. His previous publications include 'The Tudor Court' (1992) and 'Elizabeth I' (2003).

The Court During the Protectorate 1547-49

Educating and Entertaining a Prince

The Succession Crisis of July 1553

The Court of a femme seule

The Eye of the Storm

Appendix I The Structure of the Court

Appendix II The Chief Officers of the Court

GOR001180729
Intrigue and Treason: The Tudor Court, 1547-1558 by David Loades
David Loades
Used - Very Good
Paperback
Pearson Education Limited
2004-09-09
348
0582772265
9780582772267
N/A
Book picture is for illustrative purposes only, actual binding, cover or edition may vary.
This is a used book - there is no escaping the fact it has been read by someone else and it will show signs of wear and previous use. Overall we expect it to be in very good condition, but if you are not entirely satisfied please get in touch with us.