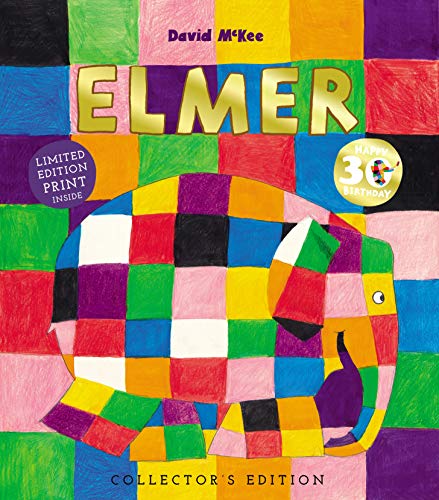 Used Price
£9.19
New RRP £14.99
Free Shipping in the UK
Elmer is different.Collect this special 30th birthday hardback edition of David McKee's first book about Elmer, that turned this adorable patchwork elephant into a nursery favourite. Elmer the colourful patchwork elephant has been a nursery favourite since this first book was published in 1989.
Reviews:
Trustpilot
Very Good

Elmer is different. Elmer is patchwork. The grey elephants all love him, but he soon starts to wonder what it would be like to be just the same as them... Full of colour, wisdom and pathos, little readers will love this classic tale at bedtime. Collect this special 30th birthday hardback edition of David McKee's first book about Elmer, that turned this adorable patchwork elephant into a nursery favourite. With this collector's edition comes a very special Elmer print inside! Deservedly a modern classic, with over ten million copies of his books sold worldwide, Elmer's subtle message, that it is ok to be different, resonates with children across the world. Elmer the colourful patchwork elephant has been a nursery favourite since this first book was published in 1989. Happy 30th Birthday, Elmer! 'A deserved favourite with the 2-5s' SUNDAY TIMES

"Unquestionably the life and soul of the party. I loved this book from the first time I read it." * Exepose *
"Its message of celebrating diversity and uniqueness is just as topical today as it was when celebrated author David McKee first created Elmer." * Junior Magazine *
"This board book edition is everything you would hope for... perfect." * The Bookbag *
"Every child should get to know Elmer the patchwork elephant.'" * Riveting Reads SLA 3-6 *

David is the creator of several well-known characters including King Rollo and Mr Benn. His most famous creation is Elmer the Patchwork Elephant which is now published in more than 50 languages and has its own successful global merchandise programme. David McKee was born in Devon and went to Plymouth Art College, where he had a traditional training. On leaving college he drew regularly for, among others, Punch, Reader's Digest, and The Times Educational Supplement. His drawings were influenced especially by Saul Steinberg and Andre Francois. David's first picture book was one of the stories he had told at college, Two Can Toucan. This was published by Abelard-Schuman in 1964 and the version David re-illustrated in 1985 was re-issued in 2001 by Andersen Press. David has written and illustrated over 50 picture books for Andersen Press including 24 original Elmer stories. David lives in Arles, France

GOR009769634
Elmer: 30th Anniversary Collector's Edition with Limited Edition Print by David McKee
David McKee
Elmer Picture Books
Used - Very Good
Hardback
Andersen Press Ltd
2019-05-02
32
1783447532
9781783447534
N/A
Book picture is for illustrative purposes only, actual binding, cover or edition may vary.
This is a used book - there is no escaping the fact it has been read by someone else and it will show signs of wear and previous use. Overall we expect it to be in very good condition, but if you are not entirely satisfied please get in touch with us.