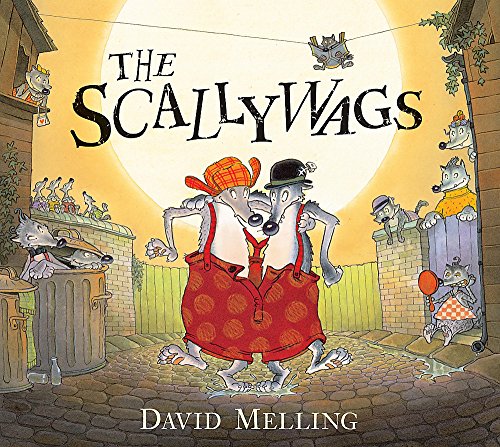 The Scallywags
by David Melling

In Stock
£5.49
Wolves tend to get quite a bad press in storybooks, but The Scallywags are determined to learn some manners! By the bestselling creator of Hugless Douglas.
Very Good Good
8 in stock

The Scallywags by David Melling

The Scallywags are a bunch of messy, noisy wolves who find it rather hard to behave properly. But as they soon discover, if it means losing your friends, then just maybe it's time to practise those manners...

By the bestselling creator of the Hugless Douglas series, which has sold over 1.4 million copies in 26 languages. Find out more about David Melling at http://www.davidmelling.co.uk/

Check out the sequel - The Scallywags Blow Their Top - in which the rambunctious wolves learn to control their tempers.

'David Melling's touch is light but this is a thought-provoking and refreshing storyline.' - Guardian

Brilliant * Write Away *
Pure delight * Carousel *
David Melling's touch is light but this is a thought-provoking and refreshing storyline * The Guardian *
Warm, funny and full of energy * The Children's Bookseller *
Pure delight. * Carousel *

'It's funny and original and an absolute delight to read aloud - a perfect bedtime read.'

* THE PARENT'S GUIDE *
An ideal bedtime book ... This delightful tale is a true charmer ... Melling's witty illustrations are packed with imaginative detail, including the masterly touch of a delicate golden line tracing the swerling path of the kiss. * The Scotsman *
Full of unexpected twists and turns The Kiss That Missed is a wonderful literary example of how to temper fearsome episdoes with humour. ... this story is one which will demand endless rereading. * writeaway.org.uk *
A deliciously written, illustrated and presented book. The Scallywags are a pack of wolves, always late, clumsy and smelly, causing the other animals to decide life is better without them. However, when they tidy themselves up, they become so clean, tidy and polite their detractors no longer recognise them! The text humorously celebrates difference and tolerance and the wonderfully energetic, funny illustrations deserve careful attention. * Booktrusted.co.uk *
...David Melling's touch is light but this is a thought-provoking and refreshing storyline. * The Guardian *
...exuberant pictures... impressive * Publishers Weekly *
This is a lovely book and David Melling's illustrations are excellent. * writeaway.org *
David Melling's touch is light but this is at thought-provoking and refreshing storyline. * The Guardian *
A fun story about acceptance with really amusing pictures * Northern Echo *

David Melling has been shortlisted for the Kate Greenaway Medal, the Smarties Book Award and the Independent Booksellers Award. His Hugless Douglas books have sold over 1.4 million copies worldwide, and the loveable brown bear has starred in a World Book Day book as well as his own theatre show. Before becoming an internationally acclaimed author-illustrator, David worked as an animation artist for films including the much-loved Father Christmas by Raymond Briggs. One of his most popular picture books The Tale of Jack Frost was animated and shown on BBC1 on Christmas Day.

GOR001116440
The Scallywags by David Melling
David Melling
Scallywags
Used - Very Good
Paperback
Hachette Children's Group
2007-05-19
32
0340884061
9780340884065
N/A
Book picture is for illustrative purposes only, actual binding, cover or edition may vary.
This is a used book - there is no escaping the fact it has been read by someone else and it will show signs of wear and previous use. Overall we expect it to be in very good condition, but if you are not entirely satisfied please get in touch with us.