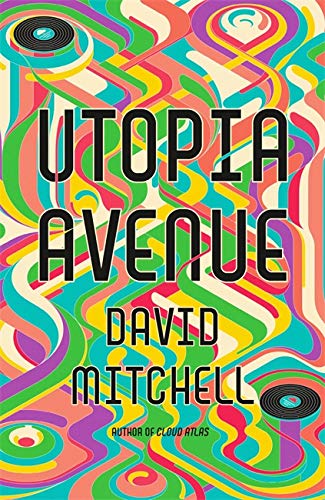 In Stock
£19.99
'One of the most brilliantly inventive writers of this, or any country' (Independent) turns his unique eye on the dark end of the 1960s in his enthralling new novel, a story of music and art, drugs and madness, love and sex, stardom's wobbly ladder and fame's Faustian pact.
New£19.99
5 in stock

The spectacular new novel from the bestselling author of CLOUD ATLAS and THE BONE CLOCKS, 'one of the most brilliantly inventive writers of this, or any country' (Independent).

Utopia Avenue are the strangest British band you've never heard of. Emerging from London's psychedelic scene in 1967 and fronted by folksinger Elf Holloway, guitar demigod Jasper de Zoet and blues bassist Dean Moss, Utopia Avenue released only two LPs during its brief and blazing journey from the clubs of Soho and draughty ballrooms to Top of the Pops and the cusp of chart success, to glory in Amsterdam, prison in Rome and a fateful American fortnight in the autumn of 1968.

David Mitchell's new novel tells the unexpurgated story of Utopia Avenue; of riots in the streets and revolutions in the head; of drugs, thugs, madness, love, sex, death, art; of the families we choose and the ones we don't; of fame's Faustian pact and stardom's wobbly ladder. Can we change the world in turbulent times, or does the world change us? Utopia means 'nowhere' but could a shinier world be within grasp, if only we had a map?

One of the most brilliantly inventive writers of this, or any country - IndependentAn author of extraordinary ambition and skill - Independent on SundayOpen up his head and a whole magical, ecstatic symphony of inventiveness and ideals will fly out - The TimesMitchell's imagination is boundless and absolutely thorough, and he is also very funny - Sunday TelegraphA storyteller of genius . . . a man who may yet prove to be the greatest writer of his age - Mail on SundayDizzyingly, dazzingly good - Daily MailOur most accomplished inventor of multitudinous worlds, which are filled with complex, vital people - Financial TimesHis novels are unlike anything else - Spectator

David Mitchell is the author of the novels Ghostwritten, number9dream, Cloud Atlas, Black Swan Green, The Thousand Autumns of Jacob de Zoet, The Bone Clocks and Slade House. He has been shortlisted twice for the Booker Prize, won the John Llewellyn Rhys, Geoffrey Faber Memorial and South Bank Show Literature Prizes among others, and been named a Granta Best Young British Novelist. In 2018, he won the Sunday Times Award for Literary Excellence, given in recognition of a writer's entire body of work.

He lives with his wife and their two children in Ireland.
.