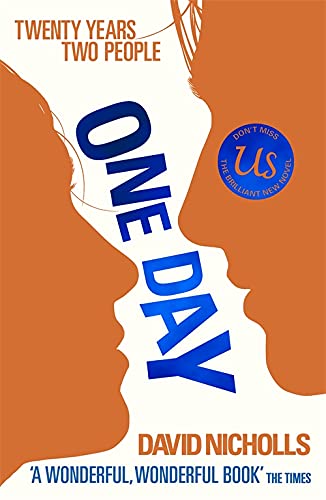 One Day
by David Nicholls

Used Price
£2.99
New RRP £8.99
Free Shipping in the UK
ONE DAY is the multi-million copy bestselling novel that brilliantly captures the experiences of a generation.
Like New Very Good Good Well Read

One Day by David Nicholls

'ONE DAY is destined to be a modern classic' - Daily Mirror

Twenty years, two people, ONE DAY. The multi-million copy bestseller that captures the experiences of a generation.

'I can imagine you at forty,' she said, a hint of malice in her voice. 'I can picture it right now.'

He smiled without opening his eyes. 'Go on then.'

15th July 1988. Emma and Dexter meet for the first time on the night of their graduation. Tomorrow they must go their separate ways.

So where will they be on this one day next year?

And the year after that? And every year that follows?

ONE DAY is destined to be a modern classic. * Daily Mirror *
Big, absorbing, smart, fantastically readable. * Nick Hornby *
A wonderful, wonderful book. * The Times *
I finished it last night and I'm still quite wobbly and affected by it. It was BRILLIANT. . . the jealousy nearly made me puke. I wish I'd written this book. * Marian Keyes *
I couldn't think of anyone who wouldn't love this book. * Simon Mayo Books Panel, BBC Radio Five Live *
An unputdownable romance for the 21st century. * SHE *
A genuine tear-jerker as well as laugh-out-loud funny. * Independent on Sunday Books of the Year 2009 *
This perfectly executed novel is a reminder that reading can be the finest entertainment there is. * Guardian *

David Nicholls is the bestselling author of Us, One Day, The Understudy and Starter for Ten. His novels have sold over eight million copies worldwide and are published in forty languages.

David trained as an actor before making the switch to writing. He is an award-winning screenwriter, with TV credits including the third series of Cold Feet, a much-praised modern version of Much Ado About Nothing, The 7.39 and an adaptation of Tess of the D'Urbervilles. David wrote the screenplays for Great Expectations (2012) and Far from the Madding Crowd (2015, starring Carey Mulligan). He recently won a BAFTA for Patrick Melrose, his adaptation of the novels by Edward St Aubyn, which also won him an Emmy nomination.

His bestselling first novel, Starter for Ten, was selected for the Richard and Judy Book Club in 2004, and in 2006 David went on to write the screenplay of the film version.

His third novel, One Day, was published in 2009 to extraordinary critical acclaim, and stayed in the Sunday Times top ten bestseller list for ten weeks on publication. One Day won the 2010 Galaxy Book of the Year Award.

David's fourth novel, Us, was longlisted for the Man Booker Prize for Fiction 2014 and was another no. 1 Sunday Times bestseller. In the same year he was named Author of the Year at the National Book Awards.

GOR010258622
One Day by David Nicholls
David Nicholls
Used - Like New
Paperback
Hodder & Stoughton General Division
2010-02-04
448
0340896981
9780340896983
Winner of Galaxy Book Awards 2010 (UK)
Book picture is for illustrative purposes only, actual binding, cover or edition may vary.
The book has been read, but looks new. The book cover has no visible wear, and the dust jacket is included if applicable. No missing or damaged pages, no tears, possible very minimal creasing, no underlining or highlighting of text, and no writing in the margins.