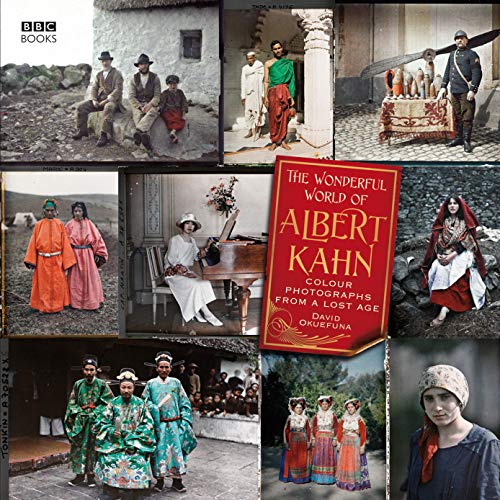 The Wonderful World of Albert Kahn by David Okuefuna

In 1909 the millionaire French banker and philanthropist Albert Kahn embarked on an ambitious project to create a colour photographic record of, and for, the peoples of the world.

The Wonderful World of Albert Kahn by David Okuefuna

In 1909 the millionaire French banker and philanthropist Albert Kahn embarked on an ambitious project to create a colour photographic record of, and for, the peoples of the world. As an idealist and an internationalist, Kahn believed that he could use the new Autochrome process, the world's first user-friendly, true-colour photographic system, to promote cross-cultural peace and understanding.

Until recently, Kahn's huge collection of 72,000 Autochromes remained relatively unheard of. Now, a century after he launched his project, this photography book and the BBC TV series it accompanies are bringing these dazzling historical photos to a mass audience for the first time and putting colour into what we tend to think of as an entirely monochrome age.

Kahn sent photographers to more than 50 countries, often at crucial junctures in their history, when age-old cultures were on the brink of being changed for ever by war and the march of 20th-century globalisation. They documented in true colour the collapse of the Ottoman and Austro-Hungarian empires, the last traditional Celtic villages in Ireland, and the soldiers of the First World War. They took the earliest known colour photographs in countries as far apart as Vietnam and Brazil, Mongolia and Norway, Benin and the United States. In 1929 the Wall Street Crash forced Kahn to bring his project to an end. He died in 1940, but left behind the most important collection of early colour photographs in the world.

A fascinating and vivid celebration of the earliest examples of colour photography -- Gareth McLean * Guardian *
Astonishing images * Time Out *
A legacy of inestimable richness -- Benjamin Secher * Telegraph *
David Okuefuna is the executive producer of the BBC television series The Wonderful World of Albert Kahn. He has worked on numerous documentary series and single films for BBC4, including Racism: A History, The Story of Maths, Shepperton Babylon and The Waughs: Fathers and Sons, as well as the BBC2 comedy-drama The Private Life of Samuel Pepys. This is his first book.
GOR002164633
9781846074585
1846074584
The Wonderful World of Albert Kahn by David Okuefuna
David Okuefuna
Used - Very Good
Hardback
Ebury Publishing
2008-04-24
336
N/A
Book picture is for illustrative purposes only, actual binding, cover or edition may vary.
This is a used book - there is no escaping the fact it has been read by someone else and it will show signs of wear and previous use. Overall we expect it to be in very good condition, but if you are not entirely satisfied please get in touch with us
Trustpilot