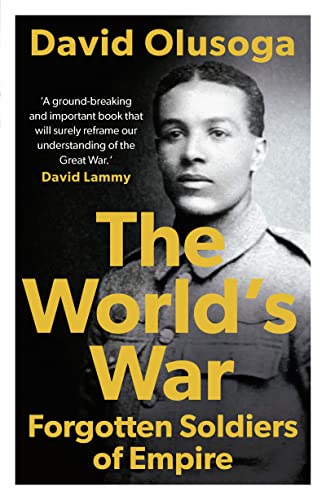 The World's War
by David Olusoga

A unique account of the millions of colonial troops who fought in the First World War, and why they were later air-brushed out of history.

The World's War by David Olusoga

In a sweeping narrative, David Olusoga describes how Europe's Great War became the World's War - a multi-racial, multi-national struggle, fought in Africa and Asia as well as in Europe, which pulled in men and resources from across the globe.

Throughout, he exposes the complex, shocking paraphernalia of the era's racial obsessions, which dictated which men would serve, how they would serve, and to what degree they would suffer. As vivid and moving as it is revelatory and authoritative.

The World's War explores the experiences and sacrifices of 4 million non-European, non-white people whose stories have remained too long in the shadows.

'In a remarkable and eye-opening book Olusoga has restored the conflict's global perspectives ... The magnificent, eloquently written The World's War is a genuinely groundbreaking piece of research' BBC History.
'The wartime experience of African, Chinese and Indian participants, for too long neglected, is detailed here' Good Book Guide.
'Meticulously researched and beautifully written' Military History Monthly.

David Olusoga is a historian and a BBC producer, and an expert on the themes of colonialism, slavery and racism. He is the co-author of the much-praised The Kaiser's Holocaust (2010).