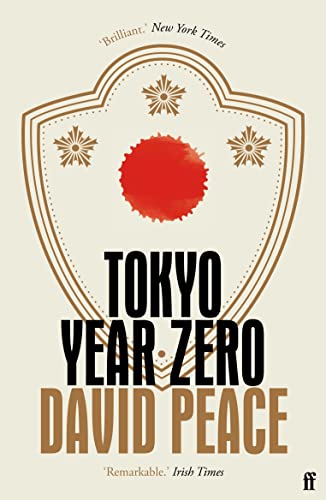 In Stock
£4.49
Part one of David Peace's 'Tokyo Trilogy', and a stunning literary thriller in its own right, from the bestselling author of GB84 and The Damned Utd.August 1946.
Very Good
9 in stock

Part one of David Peace's 'Tokyo Trilogy', and a stunning literary thriller in its own right, from the bestselling author of GB84 and The Damned Utd. August 1946. One year on from surrender and Tokyo lies broken and bleeding at the feet of its American victors. Against this extraordinary historical backdrop, Tokyo Year Zero opens with the discovery of the bodies of two young women in Shiba Park. Against his wishes, Detective Minami is assigned to the case; as he gets drawn ever deeper into these complex and horrific murders, he realises that his own past and secrets are indelibly linked to those of the dead women and their killer.

"Too often the mystery today seems ossified. How exhilarating, then, to discover David Peace through his brilliant, perplexing, claustrophobic and ambiguous seventh novel, "Tokyo Year Zero," . . Peace's masters would seem to be Dostoyevsky; postmodern collagists like William S. Burroughs and Kathy Acker; and practitioners of the French "nouveau roman "like Alain Robbe-Grillet . . . Marvelous."
-"New York Times Book Review
""A writer can be psychologically penetrating, or socially significant, or spooky as hell (Stephen King, Patrick Suskind, Chuck Palahniuk). Noir novelists drench the whole affair in atmosphere. And then there is David Peace's method-which is to be all these things, all at once . . . Once this hellish locomotive of a book hooks onto its tracks it becomes difficult to hop off."
-"San Francisco Chronicle
"
"Astounding . . . "Tokyo Year Zero" is Peace's most accessible work, the culmination of years of fine-tuning his idiosyncratic voice to its truest frequency . . . What we have here is not just a novel with voice, but also with rhythm, which must be learned and sharpened by the writer and is extraordinarily difficult to get right."
-"Los Angeles Times Book Review
"
"The big post-war Japan novel, a fierce marriage of mood and narrative drive. David Peace continues to polish and advance his particular brand of literary crime fiction."
-George Pelecanos
"Riveting . . . Peace, whose complex style feels like a cross between Haruki Murakami and James Ellroy, delivers an expressionistic portrait of a harrowing, devastated time and place."
-"Publishers Weekly "(starred)
"Peace is clearly making something that is absolutely andunquestionably unique . . . His books are doubly exciting, and doubly disturbing, because Peace demonstrates what we instinctively know and fear to be true about the world: that there are, of course, moral absolutes, but that we all live, in our daily lives, as moral relativists. What Peace then adds to this already compelling schema is a vivid and detailed depiction of place and a strong poetic use of language."
-"The Guardian" (UK)"
"
"Out of the facts [of postwar Tokyo], Peace weaves a thriller that is both a gory psychological whodunit and a meditation on the origins of modern Japan. The result is something dark and bloody, the tone lying somewhere between Kurosawa's "Macbeth" and the caricatures of the more violent manga cartoons."
-"The Observer "(UK)"
""A stunning piece of writing, powerful, moving, unsentimental but deeply felt . . . A detective novel? Perhaps. A thriller? Certainly. But its core is more attuned to Dostoevsky than Conan Doyle . . . Peace controls everything with a poise that steals your breath . . . He is a writer whose dark, dramatic gifts have produced some of the most disturbing books of our time. His body of work is stacking up to become a landmark in modern fiction."
"-The Scotsman "(UK)"
""A triumph, an audacious, dazzling, furiously-paced, admirably intelligent page-turner that both tugs at the heart and chills the blood. This is Peace at the peak of his form . . . It does David Peace a disservice to describe him as a crime writer. He is, quite simply, one of the most compelling and original contemporary authors anywhere, in any context. That he has chosen to write crime fiction is cause for fans of the genre to give thanks. Andthey should certainly give thanks for "Tokyo Year Zero,""
-"Yorkshire Post "(UK)"
"
"A lyrical tour through the dark, bubbling chaos of post--World War II Japan, "Tokyo Year Zero" is both an inquiry into a local atrocity and an investigation into the greatest collective identity crisis in modern history. By laying before us the black re-birth of a nation in 1946, Peace provides essential insight into the world of today."
-John Burdett
""Tokyo Year Zero "is part historical stunner, part Kurosawa crime film, an original all the way. David Peace's depiction of a war-torn metropolis both crumbling and ascendant is peerless, and the story itself is beautifully wrought."
-James Ellroy

David Peace was born in Yorkshire. He is the author of the Red Riding Quartet (Nineteen Seventy Four, Nineteen Seventy Seven, Nineteen Eighty and Nineteen Eighty Three), which was adapted into a Channel 4 series; Tokyo Year Zero and Occupied City, the first two parts of his Tokyo Trilogy; GB84, which was awarded the James Tait Black Memorial Award; The Damned Utd, made into a film starring Michael Sheen; and Red or Dead, a novel about Bill Shankly.

GOR001187986
Tokyo Year Zero by David Peace
David Peace
Used - Very Good
Paperback
Faber & Faber
2008-09-04
400
0571231993
9780571231997
N/A
Book picture is for illustrative purposes only, actual binding, cover or edition may vary.
This is a used book - there is no escaping the fact it has been read by someone else and it will show signs of wear and previous use. Overall we expect it to be in very good condition, but if you are not entirely satisfied please get in touch with us.