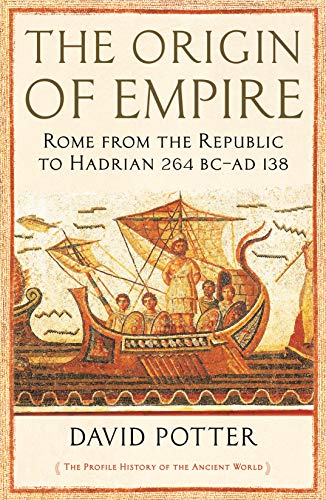 The Origin of Empire
by David Potter

The Origin of Empire Summary

In 264 BC, a Roman army was poised to cross from southern Italy into Sicily. They couldn't know that this crossing would be Rome's first step on its journey from local republic to vast and powerful empire. At the beginning of the three dramatic centuries that make up this book's narrative, Rome had no emperor and limited global influence; by the book's end, Hadrian was set to pass into history as one of the greatest emperors, whose territories stretched from England to Turkey. In David Potter's masterful history of this period, we trace the process of cultural, political and civic transformation which led to the creation of a monarchy and the acquisition of territory, via wars with Hannibal, the destruction of Carthage, Augustan Empire-building and Hadrian's famous wall, all of which contributed to the most successful multi-cultural state in the history of Europe. This is a lively, scholarly approach to an essential era.

The Origin of Empire Reviews

A highly readable history of a fascinating period * BBC History Magazine *
Potter has written a characteristically crisp, vibrant, and provocative new account of a turbulent and fascinating period in Roman history. Highly recommended. -- Carlos Norena, author * Imperial Ideals in the Roman West *
Combines a sweeping narrative with impressively detailed analysis of the factors behind Rome's imperial conquests and internal turbulence. An invaluable resource. -- Catherine Steel, Professor of Classics, University of Glasgow
Potter presents this epic tale afresh with insight, erudition and remarkable detail. His approach stands out for its clear-eyed exposure of the bloodshed, suffering and persistent strife that led eventually to the Republic's self-destruction and the unexpected emergence of Pax Romana. Here is a book that should jolt generous admirers of ancient Rome to rethink their viewpoint. -- Richard Talbert, Kenan Professor of History, University of North Carolina, Chapel Hill
As a portrait of an old and vast representative republic deteriorating into an autocracy, Potter's book is easily, even alarmingly, lucid. * Open Letters Review *