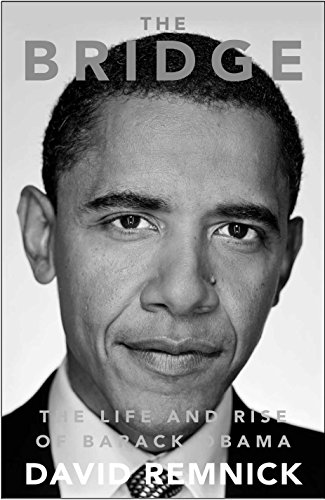 The Bridge
by David Remnick

In Stock
£6.49
From the Pulitzer Prize-winning, bestselling author of King of the World, the first full biography of Barack Obama and a defining moment in American - and global - history
Very Good
Only 3 left

The Bridge: The Life and Rise of Barack Obama by David Remnick

The rise of Barack Obama is one of the great stories of this century: a defining moment in American history, and one with truly global resonance. Until now, no journalist or historian has written a book that fully investigates the circumstances and experiences of Obama's life or explores the ambition and conviction behind his journey to election. The Bridge - from a writer whose gift for illuminating the historical significance of unfolding events is unsurpassed - offers a portrait, at once masterly and fresh, nuanced and unexpected, of the man who was determined to become the first African-American president.

Through extensive on-the-record interviews with friends and teachers, mentors and disparagers, family members and Obama himself, David Remnick allow us to see an early life coloured by absence and uncertainty: one that asked demanding questions of a rootless and literate man in search of himself, sending him firstly towards social work and then into law. Deftly setting Obama's burgeoning political career against the volatile scene in Chicago, Remnick shows us how it was that city's complex racial legacy that shaped the young politician and made his first forays into politics a source of controversy and bare-knuckle tactics: his clashes with older black politicians in the Illinois State Senate, his disastrous decision to challenge the former Black Panther Bobby Rush for Congress in 2000, the sex scandals that would decimate his more experienced opponents in the 2004 Senate race, and the story - from both sides - of his confrontation with his former pastor, Jeremiah Wright.

In exploring the way in which Barack Obama imagined and fashioned an identity for himself against the backdrop of race in America, Remnick illuminates an American life without precedent, and reminds us that, electrifying though Obama's victory may have been, there was nothing fated about it. Interrogating both the personal and political elements of the story - and, most crucially, the points at which they intersect - he gives shape to a decisive period of American history, and in turn, to the way it crucially influenced, animated and motivated a gifted and complex man.

"If you care about American politics, you have to read "The Bridge."" -"Salon"
"Writing with emotional precision and a sure knowledge of politics, Mr. Remnick situates Mr. Obama's career firmly within a historical context." -Michiko Kakutani, "The New York Times"
"A brilliantly constructed, flawlessly written biography." - Douglas Brinkley, "The Los Angeles Times"
" "
"Exhaustively researched...Remnick has many important additions and corrections to make to our reading of "Dreams From My Father..".The book's insights into Obama's character will be very useful for understanding the man's performance as president." -Garry Wills, "The New York Times Book Review"
"An expansive work...Recounting a pivotal March 2007 speech in Selma, Remnick writes that Obama's words were 'at once personal, tribal, national and universal.' The same can be said of "The Bridge."" -"Time"
"Remnick deserves credit for telling Obama's story more completely than others, for lending a reporter's zeal to the task, for not ducking the discussion of race and for peeling back several layers of the onion that is Barack Obama." -"The Washington Post"
"What Remnick brings to a complex story are the tools of an exceptional reporter: persistence, curiosity, insight. He weaves in hours of on-the-record interviews with schoolmates, teachers, mentors, advisers and scholars...rich in reflections and refractions." -Bloomberg.com
"Superb. Beautifully written and artfully constructed." -"The Economist"
"Eminently readable...the great achievement of the book is that Remnick manages to say something different...Remnick himself is a bridge--to seeing fresh a man we think we know but only now, in his hard days in the White House, are beginning to understand." -"The Boston Globe"
"An insightful, nuanced look at the making of the 44ths president, placing his career in the context of history." -"Chicago Tribune"
"There are a few people ofa

David Remnick has been the editor of the New Yorker since 1998. He was a staff writer for the magazine from 1992 to 1998 and, previous to that, the Washington Post's correspondent in the Soviet Union. He won a Pulitzer Prize in 1994 for his book Lenin's Tomb: The Last Days of the Soviet Empire. He lives in New York City with his wife and children.

GOR002778322
The Bridge: The Life and Rise of Barack Obama by David Remnick
David Remnick
Used - Very Good
Hardback
Pan Macmillan
2010-05-07
672
0330509942
9780330509947
Long-listed for BBC Four Samuel Johnson Prize 2011 (UK)
Book picture is for illustrative purposes only, actual binding, cover or edition may vary.
This is a used book - there is no escaping the fact it has been read by someone else and it will show signs of wear and previous use. Overall we expect it to be in very good condition, but if you are not entirely satisfied please get in touch with us.