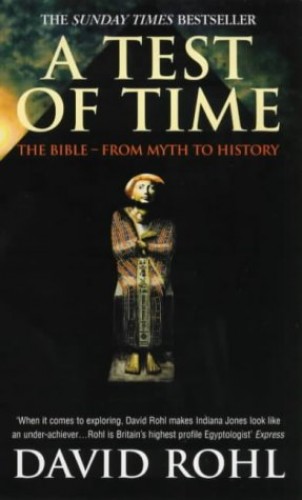 A Test Of Time
by David Rohl

In Stock
£16.99
By employing the same basic methodologies used to establish the currently accepted chronology, it has been possible for a group of young archaeologists, including David Rohl, to create a New Chronology which resolves many of the problems permeating ancient world studies.
Very Good Well Read
Only 1 left

A Test Of Time Summary

A Test Of Time: Volume One-The Bible-From Myth to History by David Rohl

By employing the same basic methodologies used to establish the currently accepted chronology, it has been possible for a group of young archaeologists, including David Rohl, to create a New Chronology which resolves many of the problems permeating ancient world studies. In particular, one model has been developed which has major implications for Old Testament research. Through the revision of the master chronology of ancient Egypt they have unlocked the key to biblical history - the epic events of the Bible really did happen as recorded in the Books of Genesis, Exodus, Judges, Samuel, Kings and Chronicles - the problem was that we had previously been looking for them in completely the wrong place in time.Many of the conundrums of the past are explained, and legendary figures such as Joseph, Moses, David and Solomon find their true political setting. Exodus and Conquest will be restored to history and the magic of legend will begin to make its great comeback

A Test Of Time Reviews

"The New Book of Revelations... A scholarly theory that has set the academic world on its ear" * Sunday Times *
"The Bible, it seems, is back in business" * Daily Mail *
"When it comes to exploring, David Rohl makes Indiana Jones look like an under-achiever... Rohl is Britain's highest profile Egyptologist" * Daily Express *

David Rohl is the author of three best-selling books: A Test of Time, Legend and The Lost Testament which have been published in nine different languages. David also presented the internationally acclaimed television series 'Pharaohs and Kings' and the documentary 'In Search of Eden'. He is currently completing another archaeological series entitled 'The Egyptian Genesis' dealing with the origins of Egyptian civilisation. David is Director of the Eastern Desert Survey, responsible for recording the rock-art of Egypt's desert mountains between the Nile Valley and Red Sea. He is the organiser of 'Legend Conferences' in the UK and Egypt, as well as giving lectures around the world.

GOR001404934
A Test Of Time: Volume One-The Bible-From Myth to History by David Rohl
David Rohl
Used - Very Good
Paperback
Cornerstone
2001-04-05
608
0099416565
9780099416562
N/A
Book picture is for illustrative purposes only, actual binding, cover or edition may vary.
This is a used book - there is no escaping the fact it has been read by someone else and it will show signs of wear and previous use. Overall we expect it to be in very good condition, but if you are not entirely satisfied please get in touch with us.