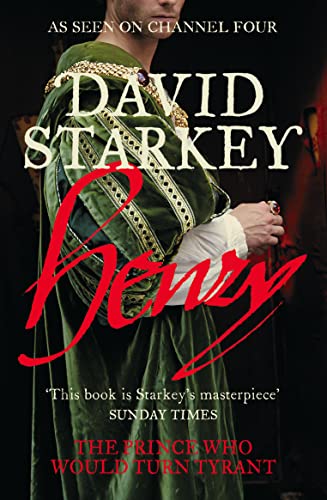 Larger than life in every sense, Henry VIII was Britain's most absolute monarch - but he was not born to rule. In this brilliantly readable history, David Starkey follows the promising young prince - a Renaissance man of exceptional musical and athletic talent - as he is thrust into the limelight after the death of his elder brother. His subsequent quest for fame was as obsessive as that of any modern celebrity, and his yearning for a male heir drove him into dangerous territory.

The culmination of a lifetime's research, David Starkey's biography is an unforgettable portrait of the man behind the controversies, the prince turned tyrant who continues to tower over history.

`Brilliant. Every page has an intimate fascination. An accessible and entertaining book.' Hilary Mantel, Guardian

'Writing with a mixture of tabloid verve and original scholarship, peppering every page with pungent wit and yet never skimping on the detail...the best political history of the reign of Henry VIII so far...an outstanding overture.' John Guy, Sunday Times

`If you like Henry VIII, this is what you'll like.' Tim Martin, Daily Telegraph (Books of the Year)

`Starkey gives us an unexpectedly fresh-faced Henry VIII in his breezy biography.' Dominic Sandbrook, Daily Telegraph (Books of the Year)

`It is brilliant, beady-eyed history, and every page of it has an intimate fascination...Starkey has eschewed the easy wisdom of hindsight...his strength is that he questions everything...he seeks fresh evidence...his writing is uncluttered and conversational, and he cuts through the back-story...with grace, clarity and wit...accessible and entertaining.' Guardian

David Starkey is Honorary Fellow of Fitzwilliam College, Cambridge, and the author of many books including 'Elizabeth', `Six Wives: The Queens of Henry VIII' and 'Monarchy: England and Her Rulers from the Tudors to the Windsors'. He is a winner of the WH Smith Prize and the Norton Medlicott Medal for Services to History, presented by Britain's Historical Association. He is a well-known television and radio personality and was made a CBE in 2007. He lives in London.

GOR001199437
Henry: Virtuous Prince by David Starkey
David Starkey
Used - Very Good
Paperback
HarperCollins Publishers
2009-03-19
400
0007247729
9780007247721
N/A
Book picture is for illustrative purposes only, actual binding, cover or edition may vary.
This is a used book - there is no escaping the fact it has been read by someone else and it will show signs of wear and previous use. Overall we expect it to be in very good condition, but if you are not entirely satisfied please get in touch with us.