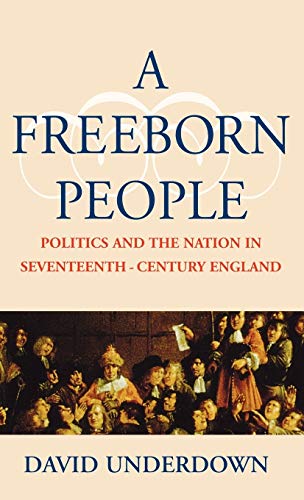 A Freeborn People
by David Underdown

In Stock
£7.99
This text examines how the political cultures of the elite and of the common people intersected during the 17th century in England. It looks at politics at all social levels and investigates how it was affected by expectations about women's roles in politics.
Very Good
Only 2 left

A Freeborn People: Politics and the Nation in Seventeenth-Century England by David Underdown

A Freeborn People is a provocative exploration of the ways in which the political cultures of the elite and of common people intersected during the seventeenth century. David Underdown shows that the two worlds were not as separate as historians have often thought them to be; English men and women of all social levels had similar expectations about good government and about the traditional liberties available to them under the `Ancient Constitution'. Throughout the century, both levels of politics were also powerfully influenced by prevailing assumptions about gender roles, and, especially in the years before the civil wars, by fears that the country was threatened by evil forces of satanic inversion. This dramatic reinterpretation of the Stuart period, based on the author's acclaimed 1992 Ford Lectures, begins a new chapter in the continuing debate over the historical meaning of Britain's seventeenth-century revolutions.

it is when we come to the relation between elite and popular culture during the Interregnum that the strengths of Underdown's approach - and the freshness of his conclusions - are most apparent ... A Freeborn People is stimulatingly and... courteously argued. * Times Literary Supplement *
This is a book full of insights and fertile connections, based on a lifetime of research in the field. * David L. Smith, Selwyn College, Cambridge, Journal of Ecclesiastical History *
Underdown's crisply written, stimulating volume takes the agenda one step further to challenge the compartmentalization of elite and popular politics ... an impressive survey of a century of English politics and culture, including the place of England's revolution in this period of change and continuity ... no one has advanced the argument before with such range and scholarly panache. * Barry Reay, University of Auckland, History *
Underdown is incapable of writing uninterestingly ... the book suggests and stimulates * Blair Worden, History Today, January 1998 *
This fine book provides an excellent brief summary of the thinking of David Underdown, one of the foremost living scholars of early modern English history ... In elegant and lucid prose, he presents compelling arguments against fashionable modern views about central questions in seventeenth-century English history and outlines his own interesting interpretation ... This is an excellent brief analysis of Stuart political life and its links with the social, cultural, and regional history of the period. * Johann P. Sommerville, American Historical Review *

David Underdown is George Burton Adams Professor of History at Yale University. His books include Revel, Riot, and Rebellion: Popular Politics and Culture in England 1603-1660, reissued in May 1996 in Oxford Paperbacks.

GOR003635703
A Freeborn People: Politics and the Nation in Seventeenth-Century England by David Underdown
David Underdown
Used - Very Good
Hardback
Oxford University Press
1996-09-01
192
0198206127
9780198206125
N/A
Book picture is for illustrative purposes only, actual binding, cover or edition may vary.
This is a used book - there is no escaping the fact it has been read by someone else and it will show signs of wear and previous use. Overall we expect it to be in very good condition, but if you are not entirely satisfied please get in touch with us.