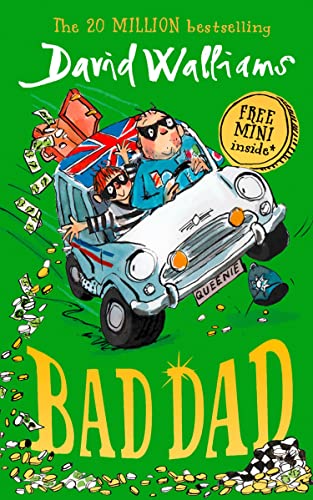 Dads come in all sorts of shapes and sizes.

A high-speed cops and robbers adventure with heart and soul about a father and son taking on the villainous Mr Big - and winning!

This riches-to-rags story will have you on the edge of your seat and howling with laughter!

Bad Dad is a fast and furious, heart-warming story of a father and son on an adventure - and a thrilling mission to break an innocent man into prison!

GOR008735716
Bad Dad by David Walliams
David Walliams
Used - Like New
Hardback
HarperCollins Publishers
2017-11-02
448
0008164657
9780008164652
N/A
Book picture is for illustrative purposes only, actual binding, cover or edition may vary.
The book has been read, but looks new. The book cover has no visible wear, and the dust jacket is included if applicable. No missing or damaged pages, no tears, possible very minimal creasing, no underlining or highlighting of text, and no writing in the margins.