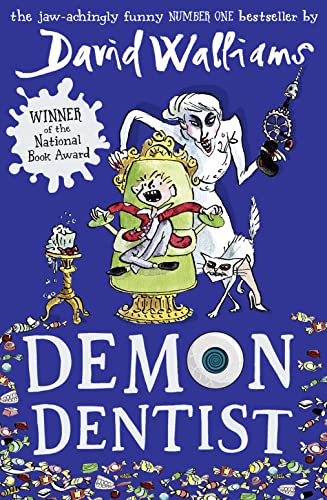 The latest jaw-achingly funny, number-one bestselling novel from David Walliams - now out in paperback. Make your appointment if you dare...

The latest jaw-achingly funny, number-one bestselling novel from David Walliams - now out in paperback. Make your appointment if you dare...

Darkness had come to the town. Strange things were happening in the dead of night. Children would put a tooth under their pillow for the tooth fairy, but in the morning they would wake up to find... a dead slug; a live spider; hundreds of earwigs creeping and crawling beneath their pillow.
Evil was at work. But who or what was behind it...?

Read this book and find out!

PRAISE FOR DAVID WALLIAMS:
"Unlike other celebrity authors, Walliams can write; his energetic fairytale will be relished" - The Times

"Walliams manages to infuse his novels with genuine wit and sly commentary...further proof that Walliams has become a master storyteller" - Heat

"Open wide for another helping of hilarity" tBk Magazine

GOR006536442
Demon Dentist by David Walliams
David Walliams
Used - Very Good
Paperback
HarperCollins Publishers
2015-02-12
448
0007453582
9780007453580
N/A
Book picture is for illustrative purposes only, actual binding, cover or edition may vary.
This is a used book - there is no escaping the fact it has been read by someone else and it will show signs of wear and previous use. Overall we expect it to be in very good condition, but if you are not entirely satisfied please get in touch with us.