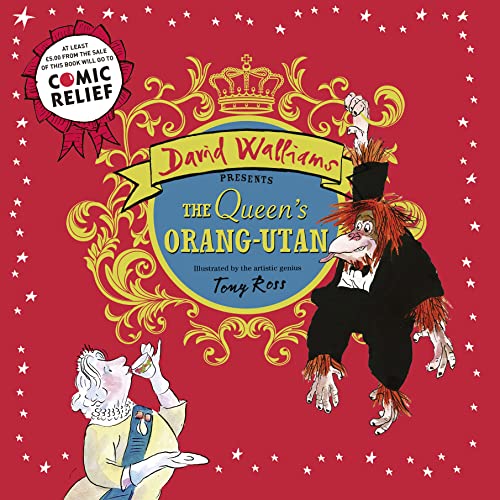 The Queen's Orang-Utan
by David Walliams

Written exclusively for Comic Relief 2015 by David Walliams. From Number One bestselling picture book duo, David Walliams and Tony Ross, comes this special Book & CD edition of this spectacular story for children of 3 and up. Also read by David Walliams, Miranda Hart and Rob Brydon.

The Queen's Orang-Utan by David Walliams

Written exclusively for Comic Relief 2015 by David Walliams. From Number One bestselling picture book duo, David Walliams and Tony Ross, comes this special Book & CD edition of this spectacular story for children of 3 and up. Also read by David Walliams, Miranda Hart and Rob Brydon.

A bored queen. A birthday wish. An outrageous orang-utan. Everything's about to go bananas!

This right royal mash-up of mischief and mayhem comes in a sumptuous slipcase and with a star-laden story CD.

Written by David Walliams as an exclusive children's picture book especially for Comic Relief - David will be giving all of his proceeds from the book to the charity. The illustrator, Tony Ross, will waive his royalties and HarperCollins UK will also donate all profits from the publishing of the book - at least GBP5 from each copy sold will go to Comic Relief.

PRAISE FOR `FIRST HIPPO ON THE MOON':
"TV star David Walliams is as adept at writing for the under-fives as for older children. Pre-schoolers will roar with laughter at The First Hippo on the Moon... " - Daily Express

PRAISE FOR DAVID WALLIAMS:
"No one has any business being as talented as David Walliams. He is one of the few comic actors who is actually funny, and is now the genius writer of ridiculously over-the-top and utterly delightful children's books..." - Spectator

"a new Roald Dahl" - The Times

GOR007298381
The Queen's Orang-Utan by David Walliams
David Walliams
Used - Very Good
Hardback
HarperCollins Publishers
2015-03-12
32
0008135126
9780008135126
N/A
Book picture is for illustrative purposes only, actual binding, cover or edition may vary.
This is a used book - there is no escaping the fact it has been read by someone else and it will show signs of wear and previous use. Overall we expect it to be in very good condition, but if you are not entirely satisfied please get in touch with us.