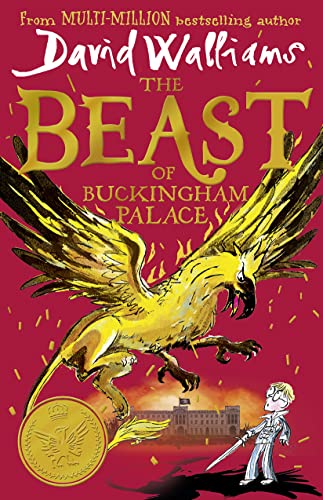 The Beast of Buckingham Palace
by David Walliams

Fly into a fiery and fantastical future with No. 1 bestselling author David Walliams, in an epic adventure of myth and legend, good and evil, and one small boy who must save the world...

The Beast of Buckingham Palace Summary

The Beast of Buckingham Palace by David Walliams

Fly into a fiery and fantastical future with No. 1 bestselling author David Walliams, in an epic adventure of myth and legend, good and evil, and one small boy who must save the world...

The young Prince Alfred has never known a life outside Buckingham Palace - but when strange goings-on breach its walls and stalk the corridors in the dead of night, he is thrust into a world of mystery, adventure and monsters.

And when his mother, the Queen, is dragged away to the Tower of London, Alfred must screw up his courage and battle to save her, himself... and the entire city.

In a future of myths and legends, join the bestselling David Walliams and venture forth into his most enthralling tale yet!

The Beast of Buckingham Palace Reviews

David Walliams has revolutionised reading for children and become one of the most influential children's writers today. Since the publication of his ground-breaking first novel, The Boy in the Dress (2008), Walliams has seen unprecedented growth with global sales exceeding 35 million copies, and his books translated into 53 languages.

GOR010210224
The Beast of Buckingham Palace by David Walliams
David Walliams
Used - Very Good
Hardback
HarperCollins Publishers
2019-11-21
464
0008262179
9780008262174
N/A
Book picture is for illustrative purposes only, actual binding, cover or edition may vary.
This is a used book - there is no escaping the fact it has been read by someone else and it will show signs of wear and previous use. Overall we expect it to be in very good condition, but if you are not entirely satisfied please get in touch with us.