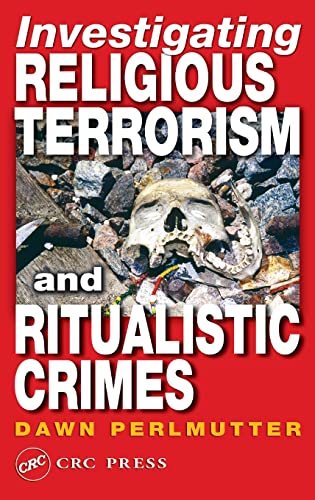 In Stock
£59.99
A manual to assist in crime scene identification, criminal investigation, and prosecution of religious terrorism and occult crime. It offers a review of contemporary religious violence, including categories of religious groups, controversial issues, and investigatory advantages of understanding religious practices.
Well Read
Only 1 left

The legalities of particular religious practices depend on many factors, such as the type of occult or religious activity, the current laws, and the intention of the individual practitioner. Written by the director of the Institute for the Research of Organized and Ritual Violence, Investigating Religious Terrorism and Ritualistic Crimes is the first complete resource to assist in crime scene identification, criminal investigation, and prosecution of religious terrorism and occult crime. It analyzes occult and religious terrorist practices from each group's theological perspective to help you understand traditional and contemporary occult groups and domestic and international terrorist religions, demarcate legal religious practice from criminal activity, and acquire techniques specific to occult and terrorist religion crime scene investigation.

Dawn Perlmutter appeared in an episode of "On the Case with Paula Zahn" (Investigation Discovery Channel)on Sunday, January 8, 2012. She consulted on a 24-year-old cold case homicide that involved the ritualistic murder of Sister Margaret Ann Pahl in the sacristy of a chapel on Easter Saturday, 1980 in Toledo, Ohio. This case involved unusual symbolic and forensic evidence. The episode will be re-run on January 14.

She was also quoted in a January 12, 2012 NPR article about the U.S. military's desecration of the corpses of Taliban fighters.

Dawn Perlmutter was interviewed by Robert Siegel August 29, 2014 on National Public Radio's All Things Considered in a segment about beheading as a modern warfare tactic.

"Don't touch anything, photograph everything, then pull this book out of the trunk of your car." - Charles Wetli, Chief Medical Examiner and Director of Forensic Sciences, Suffolk County, New York; Clinical Professor of Pathology at SUNY, Stony Brook

GOR010212828
Investigating Religious Terrorism and Ritualistic Crimes by Dawn Perlmutter
Dawn Perlmutter
Used - Well Read
Hardback
Taylor & Francis Inc
2003-12-15
453
0849310342
9780849310348
N/A
Book picture is for illustrative purposes only, actual binding, cover or edition may vary.
This is a used book. We do our best to provide good quality books for you to read, but there is no escaping the fact that it has been owned and read by someone else previously. Therefore it will show signs of wear and may be an ex library book.