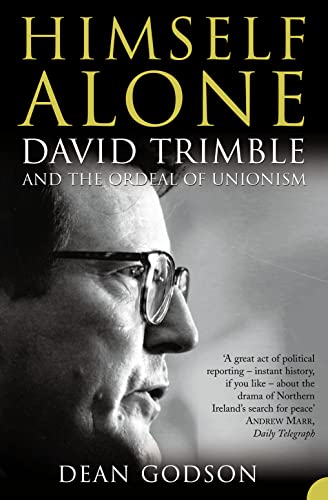 Himself Alone
by Dean Godson

The comprehensive and groundbreaking biography of the Nobel Peace Prize-winning politician, one of the most influential and important men in Irish political history.

Himself Alone: David Trimble and the Ordeal Of Unionism by Dean Godson

The comprehensive and groundbreaking biography of the Nobel Peace Prize-winning politician, one of the most influential and important men in Irish political history.

How did David Trimble, the `bete noire' of Irish nationalism and `bien pensant' opinion, transform himself into a peacemaker? How did this unfashionable, `petit bourgeois' Orangeman come to win a standing ovation at the Labour Party conference? How, indeed, did this taciturn academic with few real intimates succeed in becoming the leader of the least intellectual party in the United Kingdom, the Ulster Unionists? And how did he carry them with him, against the odds, to make an `historic compromise' with Irish nationalism?

These are just a few of the key questions about David Trimble, one of the unlikeliest and most complicated leaders of our times. Both his admirers and his detractors within the unionist family are, however, agreed on one thing: the Good Friday agreement could not have been done without him. Only he had the skills and the command of the issues to negotiate a saleable deal, and only he possessed the political credibility within the broader unionist community to lend that agreement legitimacy once it had been made.

David Trimble's achievements are extraordinary, and Dean Godson, chief leader writer of the `Daily Telegraph', was granted exclusive and complete access while writing this book.

`A great act of political reporting - instant history, if you like - about the drama of Northern Ireland's search for peace.' Andrew Marr, Daily Telegraph

`This is a perceptive, deeply informed account of the entire peace process...Well written, fair and full of insights, it is destined to become part of the history it relates.' Alan Judd, Sunday Telegraph

`This is much more than a biography: it is a moment-by-moment guide through history, a book that will become a key reference point in years to come, and is surprisingly entertaining now.' Alan Ruddock, Sunday Times

`Masterly...impressive...dispassionate...Not only is this book the definitive account of the modern history of Northern Ireland, it is also as good a guide to its embattled inhabitants as one could wish.' Daily Mail

`Dean Godson's meticulously researched biography offers an authoritative guide to the province's painful path to peace. It is a feast of eavesdropped political conversations.' New Statesman

Dean Godson was Chief Leader Writer of the 'Daily Telegraph'. Prior to that he was also a feature and profile writer for the 'Sunday Telegraph'. 'Himself Alone: David Trimble and the Ordeal of Unionism' is widely hailed as one of the most authoritative books on the Troubles. He regularly comments on national and international affairs for 'The Times', 'Sunday Times', 'Prospect' and 'The Wall Street Journal'.

GOR000816494
Himself Alone: David Trimble and the Ordeal Of Unionism by Dean Godson
Dean Godson
Used - Very Good
Paperback
HarperCollins Publishers
2005-05-05
1024
0007179995
9780007179992
N/A
Book picture is for illustrative purposes only, actual binding, cover or edition may vary.
This is a used book - there is no escaping the fact it has been read by someone else and it will show signs of wear and previous use. Overall we expect it to be in very good condition, but if you are not entirely satisfied please get in touch with us.