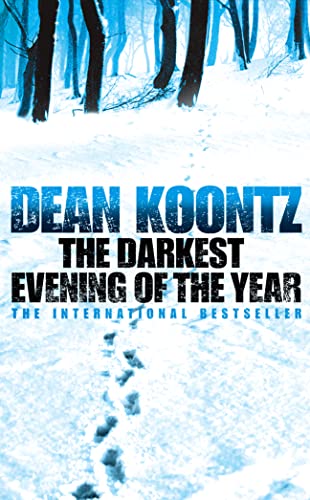 The Darkest Evening of the Year
by Dean Koontz

A fast-paced and emotionally devastating suspense novel from the bestselling author of Velocity,The Husband and The Good Guy

The Darkest Evening of the Year Summary

The Darkest Evening of the Year by Dean Koontz

A fast-paced and emotionally devastating suspense novel from the bestselling author of Velocity,The Husband and The Good Guy

Amy Redwing recklessly risks everything in her chosen field of dog rescue. When she confronts a violent drunk in order to rescue Nickie, a beautiful golden retriever, Amy has no misgivings. Dogs always do their best, and so will she. Whatever it takes.

Riding shotgun nervously is her friend and lover, Brian, an architect who would marry her if only she were not so committed to these crazy ... heroics! He blames her work for her refusal to marry him. But everything is due to change in the Redwing household.

Someone is trying to destroy Amy. Subtle intrusions escalate into terrifying assaults on everything she holds dear. Amy believes her attacker is Wes Greeley, just released after an eighteen-month stretch, thanks to Amy's testimony, for egregious animal cruelty. But if Greeley is the culprit, it's clear he's not working alone.

At last Amy understands her need of Brian, and a lot more from her troubled past that has been hidden by her passion. Unable to turn to any authority, Amy and Brian are pressed to the edge of a precipice as Koontz's most emotionally devastating thriller races with inexorable speed to a wrenching climax.

Pick up a Dean Koontz thriller and you can't put it down: try one

The Darkest Evening of the Year Reviews

`The long, dark winter nights take centre stage and keep you on tenterhooks in this brooding thriller' News of the World

GOR000539138
The Darkest Evening of the Year by Dean Koontz
Dean Koontz
Used - Very Good
Paperback
HarperCollins Publishers
2008-07-01
400
0007226624
9780007226627
N/A
Book picture is for illustrative purposes only, actual binding, cover or edition may vary.
This is a used book - there is no escaping the fact it has been read by someone else and it will show signs of wear and previous use. Overall we expect it to be in very good condition, but if you are not entirely satisfied please get in touch with us.