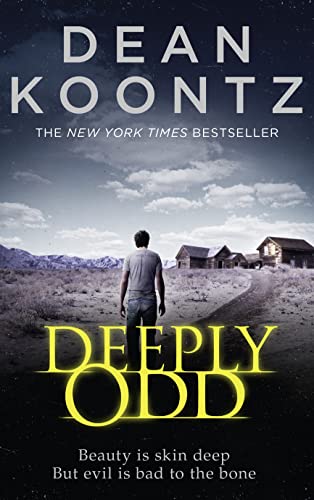 Later that morning, when I walked downtown to buy blue jeans and a few pairs of socks, I met a guy who offered to neuter me with a .45 pistol.

In a sinister encounter with a rogue truck driver, Odd - who has the gift of seeing the dead and the soon-to-be dead - has a disturbing vision of the slaughter of three innocent children.

Across California, into Nevada and back again, Odd embarks on a road chase to prevent the tragedy. But he is to discover that he is not up against a single twisted sociopath but a mysterious network of evil men and women whose resources appear supernatural.

Luckily, in this world that Odd finds so beautiful and full of wonders, and deeply odd as well, he meets a collection of like-minded eccentrics who will help him to take the next giant step towards his destiny.

He was born and raised in Pennsylvania and lives with his wife Gerda, and their dog Anna, in southern California.

GOR005207380
Deeply Odd by Dean Koontz
Dean Koontz
Used - Very Good
Paperback
HarperCollins Publishers
2013-10-01
432
0007327064
9780007327065
N/A
Book picture is for illustrative purposes only, actual binding, cover or edition may vary.
This is a used book - there is no escaping the fact it has been read by someone else and it will show signs of wear and previous use. Overall we expect it to be in very good condition, but if you are not entirely satisfied please get in touch with us.