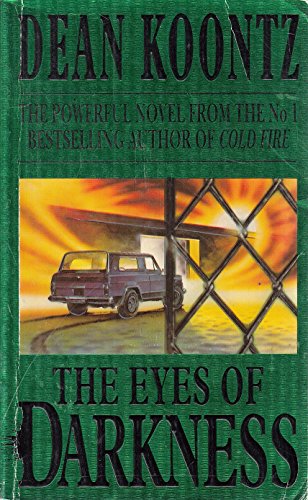 The Eyes of Darkness
by Dean Koontz

The Eyes of Darkness Summary

The Eyes of Darkness: A terrifying horror novel of unrelenting suspense by Dean Koontz

It's a year since Tina Evans lost her little boy Danny in a tragic accident, a year since she began the painful process of trying to rebuild her life. Then a shattering message appears on the blackboard in Danny's old room: NOT DEAD.

Is it someone's idea of a grim joke? Or the tangible evidence of her tormented unconscious? Or something more?

The search for an answer, the search for Danny, demands a courage and endurance beyond any that Tina thought she possessed. Only her love for her son, her love for the one man who believes her, drives her on, through the neon clamour of Las Vegas nightlife, the sun-scorched desert, and the frozen mountains of the High Sierra. People die, coldly, brutally, as a buried truth struggles to surface. A truth so incredible, so frightening, so dangerous that its secret must be kept at the price of any life - any man, any woman...any child.

Customer Reviews - The Eyes of Darkness

The Eyes of Darkness Reviews

Praise for Dean Koontz's novels: 'Koontz redefines suspense * The Times *
Koontz`s style bleaches out cliches while showing a genius for detail * Publishers Weekly *
Koontz's art is making the reader believe the impossible... sit back and enjoy it * Sunday Telegraph *
A master of the thriller genre * Washington Post *
Scary. Koontz can really spook, and his dialogue and pacing rival the best * New York Post *
Fast and furious...like a hospital trolley on a toboggan run * Mail on Sunday *
Tumbling, hallucinogenic prose... "Serious" writers might do well to examine his technique. The story does not move so much as rocket up the gloomy highway with the reader in violent pursuit * New York Times *

GOR002666284
The Eyes of Darkness: A terrifying horror novel of unrelenting suspense by Dean Koontz
Dean Koontz
Used - Very Good
Paperback
Headline Publishing Group
1992-03-01
384
0747237697
9780747237693
N/A
Book picture is for illustrative purposes only, actual binding, cover or edition may vary.
This is a used book. We do our best to provide good quality books for you to read, but there is no escaping the fact that it has been owned and read by someone else previously. Therefore it will show signs of wear and may be an ex library book.