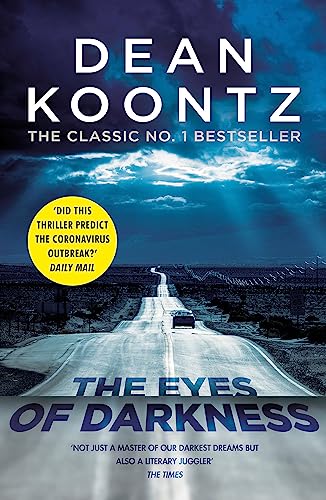 The Eyes of Darkness
by Dean Koontz

In Stock
£3,29
A brilliant thriller of heart-stopping suspense from the internationally bestselling author of the Odd Thomas series.
Very Good Good Well Read
20 in stock

The Eyes of Darkness Summary

The Eyes of Darkness: A gripping suspense thriller that predicted a global danger... by Dean Koontz

A search for a missing son... and a toxic mystery that threatens the globe.

'Did a 1981 Dean Koontz thriller predict the coronavirus outbreak?' Daily Mail
'Dean Koontz is not just a master of our darkest dreams, but also a literary juggler' The Times

From bestselling phenomenon Dean Koontz, The Eyes of Darkness is a gripping thriller following a mother's search for her son - a journey that unlocks the deadliest of secrets.

It's a year since Tina Evans lost her little boy Danny in a tragic accident.
Then a shattering message appears on the blackboard in Danny's old room: NOT DEAD.
Is it someone's idea of a grim joke? Or something far more sinister?

The search for an answer drives Tina through the neon clamour of Las Vegas nightlife.
The sun-scorched desert. The frozen mountains of the High Sierra.

People face a dreadful danger as a buried truth struggles to surface.
A truth so frightening that its secret must be kept at the price of any life - any man, any woman...any child.

Why readers are obsessed with The Eyes of Darkness:

'Couldn't put it down...it's been a while since a book has kept me up all night.' ***** Goodreads review

'So prophetic I really can't believe it.' ***** Goodreads review

'It is simply unbelievable.' ***** Goodreads review

This book was originally published under the pseudonym Leigh Nichols.

The Eyes of Darkness Reviews

GOR008772837
The Eyes of Darkness: A gripping suspense thriller that predicted a global danger... by Dean Koontz
Dean Koontz
Used - Very Good
Paperback
Headline Publishing Group
2016-05-05
336
1472240294
9781472240293
N/A
Book picture is for illustrative purposes only, actual binding, cover or edition may vary.
This is a used book - there is no escaping the fact it has been read by someone else and it will show signs of wear and previous use. Overall we expect it to be in very good condition, but if you are not entirely satisfied please get in touch with us.