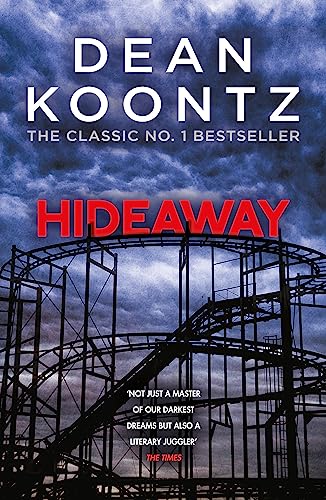 Used Price
£7.79
New RRP £8.99
Free Shipping in the UK
Can you hide away from the darkness within?
Reviews:
Trustpilot
Very Good

If you delight in the suspense of Stephen King and The Stranger by Harlan Coben chilled you to the bone (in the best possible way), you'll love Hideaway - the classic thriller by Sunday Times and New York Times bestselling author Dean Koontz. 'Not just a master of our darkest dreams but also a literary juggler' - The Times.

Although accident victim Hatch Harrison dies en route to the hospital, a brilliant physician miraculously resuscitates him. Given this second chance, Hatch and his wife Lindsey approach each day with a new appreciation of the beauty of life - until a series of mysterious and frightening events brings them face to face with the unknown.

Although Hatch was given no glimpse of an afterlife during the period when his heart had stopped, he has reason to fear that he has brought a terrible presence back with him... from the land of the dead.

When people who have wronged the Harrisons begin to die violently, Hatch comes to doubt his own innocence - and must confront the possibility that this life is just a prelude to another, darker place.

GOR008302179
Hideaway: A spine-chilling, supernatural horror novel by Dean Koontz
Dean Koontz
Used - Very Good
Paperback
Headline Publishing Group
2016-05-19
400
1472234588
9781472234582
N/A
Book picture is for illustrative purposes only, actual binding, cover or edition may vary.
This is a used book - there is no escaping the fact it has been read by someone else and it will show signs of wear and previous use. Overall we expect it to be in very good condition, but if you are not entirely satisfied please get in touch with us.