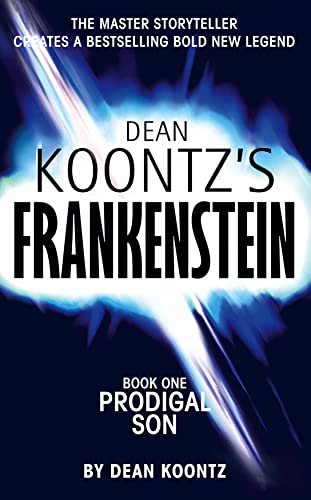 SOMEONE NEW IS PLAYING GOD
The Frankenstein story updated to the 21st century by the great American storyteller Dean Koontz.

SOMEONE NEW IS PLAYING GOD
The Frankenstein story updated to the 21st century by the great American storyteller Dean Koontz.

Created centuries ago by a madman, possessed of seemingly supernatural powers and a dogged drive for justice, the mysterious Deucalion arrives in New Orleans as the next generation of Dr Frankenstein's monsters are about to be unleashed by their deranged maker, now known as Victor Helios.

Deucalion's path will cross with that of tough police detective Carson O'Connor and her partner, Michael Maddison, who are on the trail of a vicious serial killer stalking the city, a killer who selects his victims for the humanity that is missing in himself.

Reluctantly, Carson will join forces with Deucalion against a far greater, terrifying threat: an entire race of killers who are much more - and less - than human ...

Deucalion seeks one final confrontation with the evil genius who created him, Dr Frankenstein.

'A modern Swift ... a master satirist.' Entertainment Weekly 'If Stephen King is the Rolling Stones of novels, Koontz is the Beatles.' Playboy 'Dean Koontz writes page-turners, middle-of-the-night sneak-up-behind-you suspense thrillers. He touches our hearts and tingles our spines.' Washington Post Book World 'Tumbling, hallucinogenic prose. Serious writers might do well to study his technique.' New York Times Book Review 'Fast-paced and dark ... Koontz knows we live in a world where evil delights in justifying itself ... Classic literature that deserves a place on the bookshelf beside Orwell's 1984 and Bradbury's Fahrenheit 451.' California Literary Review 'Koontz is writing right where popular culture swells into something larger, just as it did for Homer, Shakespeare, and Dickens. He's got the gift.' Australian 'Koontz is a superb plotter and wordsmith. He chronicles the hopes and fears of our time in broad strokes and fine detail, using popular fiction to explore the human condition.' USA Today 'Inspires both chills and serious thought ... has the power to scare the daylights out of us.' People 'The poet laureate of paranoid pop fiction.' Denver Post 'Koontz achieves a literary miracle ... stunning physical description, unique turns of phrase.' Boston Globe 'Near Dickensian powers of description.' Los Angeles Times

Kevin J. Anderson is the author of many bestselling books, including books in the X-Files, Star Wars and Legends of Dune series.

GOR001149464
Prodigal Son (Dean Koontz's Frankenstein, Book 1) by Dean Koontz
Dean Koontz
Dean Koontz's Frankenstein
Used - Very Good
Paperback
HarperCollins Publishers
2005-01-22
496
0007203136
9780007203130
N/A
Book picture is for illustrative purposes only, actual binding, cover or edition may vary.
This is a used book - there is no escaping the fact it has been read by someone else and it will show signs of wear and previous use. Overall we expect it to be in very good condition, but if you are not entirely satisfied please get in touch with us.