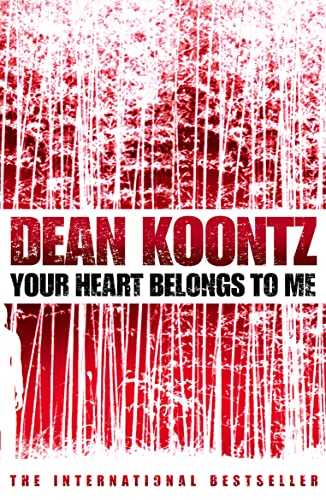 Your Heart Belongs to Me
by Dean Koontz

A high-concept new thriller from the internationally acclaimed Dean Koontz about a young man who owes his life to a heart transplant ... but confronts an imminent and far darker death

Your Heart Belongs to Me Summary

Your Heart Belongs to Me by Dean Koontz

A high-concept new thriller from the internationally acclaimed Dean Koontz about a young man who owes his life to a heart transplant ... but confronts an imminent and far darker death

At 34 Ryan Perry suddenly finds himself on a waiting list for a heart transplant. Although he keeps working and looks fit, his condition is deteriorating.

Nevertheless, Ryan manages to remain upbeat, and his reward is well deserved. He receives a new heart, and the transplant is a success.

One year later, Ryan has never felt better. Except for ... troubles connected to the heart. His new, fine, healthy, feel-good heart. It began with gifts from an unkown person, a feeling of being watched. Someone, not Ryan, transfers $100,000 from his bank account to the cardiology department of a local hospital - how is this possible?

Becoming more watchful himself, Ryan more than once glimpses a mysterious woman whom he tries to follow, but she is too circumspect even for the detective he hires to follow her. He has nothing to take to the police.

Instead, by an extraordinary effort, he uncovers the identity of the donor of ... the heart. His heart. A photo shows someone who looks awfully like the mysterious woman ... who now lets him know that everything will be taken from him: his money, his reputation, his friends, his freedom; and ultimately his heart...

Prepare for the unexpected in this compelling and fast-paced thriller from the master of suspense.

Your Heart Belongs to Me Reviews

Dean Koontz is an international household name whose hugely entertaining novels have been bestsellers in many countries, selling seventeen million copies each year. Born and raised in Pennsylvania, he lives with his wife Gerda, their dog Anna, and the enduring spirit of their dog Trixie in southern California.

GOR001124276
Your Heart Belongs to Me by Dean Koontz
Dean Koontz
Used - Very Good
Hardback
HarperCollins Publishers
2009-01-05
352
0007267568
9780007267569
N/A
Book picture is for illustrative purposes only, actual binding, cover or edition may vary.
This is a used book - there is no escaping the fact it has been read by someone else and it will show signs of wear and previous use. Overall we expect it to be in very good condition, but if you are not entirely satisfied please get in touch with us.