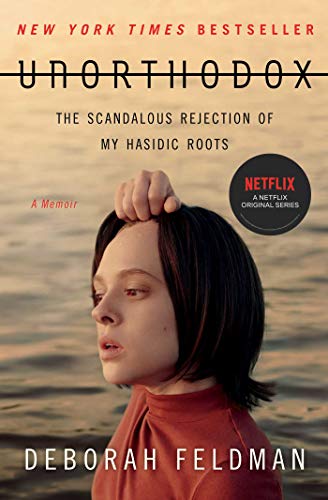 New Price
£10.99
Free Shipping in the UK
SOON TO BE A NETFLIX SERIES
Deborah Feldman's bestselling memoir of escaping from a strict Hasidic community includes a new afterword by the author detailing her life after leaving her husband and forging new beginnings for herself and her young son.
New£10.99

Unorthodox: The Scandalous Rejection of My Hasidic Roots by Deborah Feldman

Unorthodox is the bestselling memoir of a young Jewish woman's escape from a religious sect, in the tradition of Ayaan Hirsi Ali's Infidel and Carolyn Jessop's Escape, featuring a new epilogue by the author.

As a member of the strictly religious Satmar sect of Hasidic Judaism, Deborah Feldman grew up under a code of relentlessly enforced customs governing everything from what she could wear and to whom she could speak to what she was allowed to read. Yet in spite of her repressive upbringing, Deborah grew into an independent-minded young woman whose stolen moments reading about the empowered literary characters of Jane Austen and Louisa May Alcott helped her to imagine an alternative way of life among the skyscrapers of Manhattan. Trapped as a teenager in a sexually and emotionally dysfunctional marriage to a man she barely knew, the tension between Deborah's desires and her responsibilities as a good Satmar girl grew more explosive until she gave birth at nineteen and realized that, regardless of the obstacles, she would have to forge a path-for herself and her son-to happiness and freedom.

Remarkable and fascinating, this "sensitive and memorable coming-of-age story" (Pittsburgh Post-Gazette) is one you won't be able to put down.

"A brave, riveting account... Unorthodox is harrowing, yet triumphant."
- Jeannette Walls, New York Times bestselling author of The Glass Castle
"A sensitive and memorable coming-of-age story... Imagine Frank McCourt as a Jewish virgin, and you've got Unorthodox in a nutshell."
- Pittsburgh Post-Gazette
"Compulsively readable, Unorthodox relates a unique coming-of-age story that manages to speak personally to anyone who has ever felt like an outsider in her own life."
- School Library Journal
"It's one of those books you can't put down."
- Joan Rivers, in The New York Post
"An unprecedented view into a Hasidic community that few outsiders ever experience."
- Minneapolis Star-Tribune
"[Feldman's] matter-of-fact style masks some penetrating insights."
- The New York Times
"Eloquent, appealing, and just emotional enough... No doubt girls all over Brooklyn are buying this book, hiding it under their mattresses, reading it after lights out-and contemplating, perhaps for the first time, their own escape."
- The Huffington Post
"Riveting... extraordinary."
- Marie Claire

Deborah Feldman was raised in the Satmar Hasidic community in the Williamsburg section of Brooklyn, New York. She lives in Berlin with her son.

NGR9781982148201
Unorthodox: The Scandalous Rejection of My Hasidic Roots by Deborah Feldman
Deborah Feldman
New
Paperback
Simon & Schuster
2020-03-19
272
1982148209
9781982148201
N/A
Book picture is for illustrative purposes only, actual binding, cover or edition may vary.
This is a new book - be the first to read this copy. With untouched pages and a perfect binding, your brand new copy is ready to be opened for the first time.