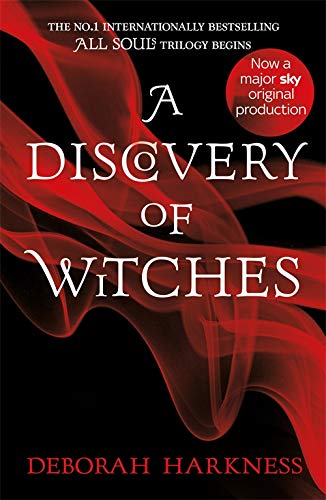 A Discovery of Witches
by Deborah Harkness

Used Price
£4.79
New RRP £8.99
Free Shipping in the UK
The phenomenal international bestseller and the first volume in the enthralling All SOULS trilogy, preceding SHADOW OF NIGHT and THE BOOK OF LIFE. SOON TO BE A MAJOR TV SERIES.
Reviews:
Trustpilot
Good Well Read

A Discovery of Witches Summary

A Discovery of Witches: Now a major TV series (All Souls 1) by Deborah Harkness

THE NUMBER ONE INTERNATIONAL AND SUNDAY TIMES BESTSELLER. A Discovery of Witches is the first in the must-have, must-read ALL SOULS trilogy.

Fall under the spell of Diana and Matthew in the stunning first volume of the No.1 internationally bestselling ALL SOULS trilogy.

A world of witches, daemons and vampires.

A manuscript which holds the secrets of their past and the key to their future.

Diana and Matthew - the forbidden love at the heart of it.

When historian Diana Bishop opens an alchemical manuscript in the Bodleian Library, it's an unwelcome intrusion of magic into her carefully ordered life. Though Diana is a witch of impeccable lineage, the violent death of her parents while she was still a child convinced her that human fear is more potent than any witchcraft. Now Diana has unwittingly exposed herself to a world she's kept at bay for years; one of powerful witches, creative, destructive daemons and long-lived vampires.

Sensing the significance of Diana's discovery, the creatures gather in Oxford, among them the enigmatic Matthew Clairmont, a vampire geneticist.

Diana is inexplicably drawn to Matthew and, in a shadowy world of half-truths and old enmities, ties herself to him without fully understanding the ancient line they are crossing. As they begin to unlock the secrets of the manuscript and their feelings for each other deepen, so the fragile balance of peace unravels...

'I could lose myself in here and never want to come out ... Utterly enchanting on every level' Manda Scott

'Exciting amounts of spells, kisses and battles, and is recounted with enchanting, page-turning panache' Marie Claire

'A bubbling cauldron of illicit desire ... an assured saga that blends romance with fantasy' Daily Mail

Customer Reviews - A Discovery of Witches

A Discovery of Witches Reviews

Deborah Harkness is the number one Sunday Times bestselling author of A Discovery of Witches, Shadow of Night and The Book of Life. A history professor at the University of Southern California, Harkness has received Fulbright, Guggenheim, and National Humanities Center fellowships.

GOR003271930
A Discovery of Witches: Now a major TV series (All Souls 1) by Deborah Harkness
Deborah Harkness
Used - Good
Paperback
Headline Publishing Group
2011-09-27
704
0755374045
9780755374045
N/A
Book picture is for illustrative purposes only, actual binding, cover or edition may vary.
This is a used book - there is no escaping the fact it has been read by someone else and it will show signs of wear and previous use. Overall we expect it to be in very good condition, but if you are not entirely satisfied please get in touch with us.