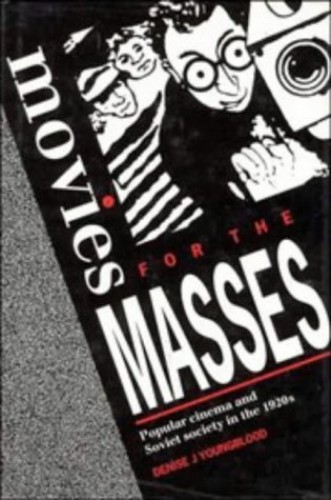 Movies for the Masses
by Denise J. Youngblood

In Stock
£9.99
This book presents a pathbreaking study of Soviet cinema in the 1920s.
Very Good
Only 1 left

Movies for the Masses Summary

Movies for the Masses: Popular Cinema and Soviet Society in the 1920s by Denise J. Youngblood

This book is a pathbreaking study of the 'unknown' Soviet cinema: the popular movies which were central to Soviet film production in the 1920s. Professor Youngblood discusses acting genres, the cinema stars, audiences, and the influences of foreign films and examines three leading filmmakers - Iakov Protazanov, Boris Barnet, and Fridikh Ermler. She also looks at the governmental and industrial circumstances underlying filmmaking practices of the era, and provides an invaluable survey of the contemporary debates concerning official policy on entertainment cinema. Professor Youngblood demonstrates that the film culture of the 1920s was predominantly and aggressively 'bourgeois' and enjoyed patronage that cut across class lines and political allegiance. Thus, she argues, the extent to which Western and pre-revolutionary influences, boureois directors and middle-class tastes dominated the film world is as important as the tradition of revolutionary utopianism in understanding the transformation of Soviet culture in the Stalin revolution.

Movies for the Masses Reviews

'Youngblood is an extremely knowledgeable guide. It seems that she has perused all contemporary film journals and read almost every film review. She wastes no time on over-clever analysis of individual frames; there is no semiotics, deconstruction or any other modern over-valued analytical tool here. Instead we hear the knowledgeable, intelligent and confident voice of an expert. It is a wonderful book.' Peter Kenez, Europe-Asia Studies
'[Movies for the masses] is often provocative and stimulating. It is also well written, very readable and has a style that engages both the reader's attention and the intellect ... It provides a wealth of statistical information ... and will appeal to a broad spectrum of readers from politics, film and cultural studies ... [It] is a 'good read' and you leave it knowing more about the period, as well as having your own arguments 'honed' by the new evidence and opinions provided.' Roger Powell, Drama
"Movies for the Masses is an excellent survey of the popular cinema of the 1920's and the debates surrounding it." Slavic and East European Journal
"[A] sprightly study of the cinema industry at the dawning f the world's first proletarian state...." Charles A. Ruud, Journal of Modern History

Introduction; Part I. Contexts: I. A historical overview 'from below'; 2. The entertainment or enlightenment debate; 3. The inostranshchina in Soviet cinema; Part II. Practice: 4. Genres and hits; 5. Images and stars; 6. Iakov Protazanov, the 'Russian Griffith'; Part III. Alternatives: 7. Boris Barnet, Soviet actor/Soviet director; 8. Fridrikh Ermler and the social problem film; 9. For workers and peasants only - factory and tractor films; Conclusion.

GOR008571442
Movies for the Masses: Popular Cinema and Soviet Society in the 1920s by Denise J. Youngblood
Denise J. Youngblood
Used - Very Good
Hardback
Cambridge University Press
1992-10-29
279
0521374707
9780521374705
N/A
Book picture is for illustrative purposes only, actual binding, cover or edition may vary.
This is a used book - there is no escaping the fact it has been read by someone else and it will show signs of wear and previous use. Overall we expect it to be in very good condition, but if you are not entirely satisfied please get in touch with us.