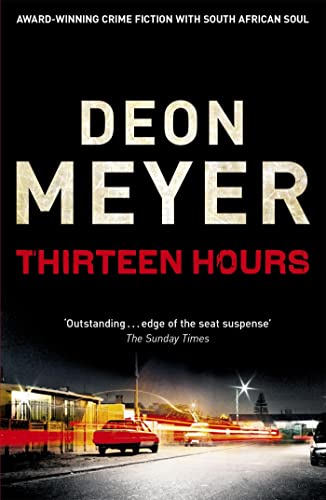 Winner of the 2011 Boeke Prize in South Africa and shortlisted for the 2010 CWA International Dagger for Best Translated Crime Novel of the Year.

They killed her best friend. Now they are chasing Rachel Anderson through the streets of Cape Town. The young tourist doesn't dare trust anyone - except her father, back home in America. When he puts pressure on the politicians, they know that to protect their country's image, they must find Rachel's hiding place before the killers.

So Benny Griessel - detective, maverick and father of teenagers himself - has just 13 hours to crack open a conspiracy which threatens the whole country.

Deon Meyer lives in Durbanville in South Africa with his wife and four children. Other than his family, Deon's big passions are motorcycling, music, reading, cooking and rugby. In January 2008 he retired from his day job as a consultant on brand strategy for BMW Motorrad, and is now a full time author. Deon Meyer's books have attracted worldwide critical acclaim and a growing international fanbase. Originally written in Afrikaans, they have now been translated into twenty-five languages.

THIRTEEN HOURS was shortlisted for the CWA International Dagger and won the Boeke Prize in South Africa - the first time in the prize's 16 year history that a South African book has won.

GOR002639847
Thirteen Hours by Deon Meyer
Deon Meyer
Benny Griessel
Used - Very Good
Paperback
Hodder & Stoughton General Division
2011-05-12
416
0340953616
9780340953617
Short-listed for CWA International Dagger 2010 (UK) Short-listed for The Barry Award 2011 (UK)
Book picture is for illustrative purposes only, actual binding, cover or edition may vary.
This is a used book - there is no escaping the fact it has been read by someone else and it will show signs of wear and previous use. Overall we expect it to be in very good condition, but if you are not entirely satisfied please get in touch with us.