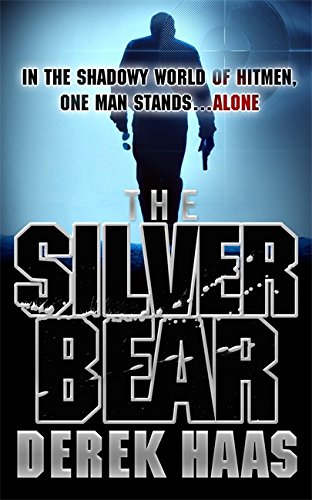 The Silver Bear
by Derek Haas

The Silver Bear by Derek Haas

When you need to get rid of a Presidential candidate, you need THE SILVER BEAR.

Columbus, the most respected and feared hitman in the criminal underworld, has killed many times using many weapons, including his bare hands. An assassin at the top of his profession, immune to the pressure of his chosen life, gliding silently beneath the view of law enforcement, he is what the Russians call a Silver Bear.

When Columbus takes the contract on a congressman running for President, he discovers that his quarry is tied to his own mysterious past. Soon, he's fighting to stay alive - and to make sure his target does not...

A short, sharp, electric shock of a book * Shots Ezine *
Plenty of action and Columbus survives a series of exciting close escapes * Canberra Times *
A thrilling page-turner - a cross between the Jason Bourne movies and the classic assassin film Leon. Read it before it turns into a movie too. * Jenni Falconer, Company**** *
A moody, gloomy but curiously gripping tale * Literary Review *
Highlights of Haas's cinematic thriller include a cross-country junket, quick reversals, lightning violence and a surprising denouement...Lean work, with every word counting and adding up to more than most authors land in twice the space * Kirkus Reviews (starred review) *
Well written, fast-paced, and engaging...a thrilling account of a professional killer at his peak...The cross-country hunt is a fast read; fans of James Patterson and Jeffrey Deaver will enjoy * Library Journal *
Blunt and to the point...had me hooked from the beginning. I found myself completely caught up with this character, and those around him, and I couldn't let go of the book until I knew the final outcome. * Book Club Forum *
Brilliant, intense portrait of a professional hit man...Hired to murder an improbable victim, his intrinsic alienation sees him seemingly proceeding towards his own death, the assignment hastening the inevitable. The balance and rhythm of Haas's first novel are exemplary as Columbus struggles to stay ahead...cinematic-style story construction, cliffhangers and urgent narrative pace. This is the kind of novel that leaves you uncomfortably uncertain of what you feel and whether it is proper to identify with Haas's protagonist. * The Australian *
Races along. In a word: FRAUGHT * The Weekend Gold Coast Bulletin, Australia *

Derek Haas is a prominent Hollywood screenwriter whose recent credits include 3:10 To Yuma which starred Russell Crowe and Christian Bale, and Wanted starring Angelina Jolie, James McAvoy and Morgan Freeman. He is currently adapting the Robert Ludlum book The Matarese Circle for MGM. The taut, disturbing thriller THE SILVER BEAR is Derek Haas's first novel, and he is working on a sequel for next year.

GOR000514616
The Silver Bear by Derek Haas
Derek Haas
Columbus
Used - Very Good
Paperback
Hodder & Stoughton
2009-03-05
272
0340976624
9780340976623
N/A
Book picture is for illustrative purposes only, actual binding, cover or edition may vary.
This is a used book - there is no escaping the fact it has been read by someone else and it will show signs of wear and previous use. Overall we expect it to be in very good condition, but if you are not entirely satisfied please get in touch with us.