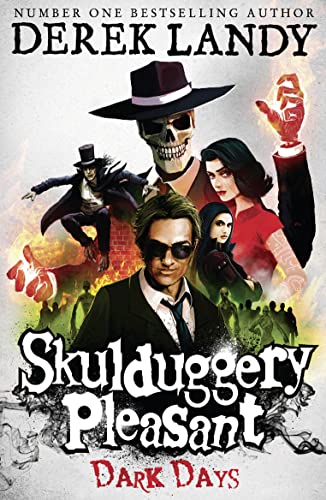 Skulduggery Pleasant is gone, sucked into a parallel dimension overrun by the Faceless Ones. If his bones haven't already been turned to dust, chances are he's insane, driven out of his mind by the horror of the ancient gods. There is no official, Sanctuary-approved rescue mission. There is no official plan to save him.

But Valkyrie's never had much time for plans.

The problem is, even if she can get Skulduggery back, there might not be much left for him to return to. There's a gang of villains bent on destroying the Sanctuary, there are some very powerful people who want Valkyrie dead, and as if all that wasn't enough it looks very likely that a sorcerer named Darquesse is going to kill the world and everyone on it.

Skulduggery is gone. All our hopes rest with Valkyrie. The world's weight is on her shoulders, and its fate is in her hands.

These are dark days indeed.

`Landy [has the] ability to craft an engaging story from start to finish.' Inis

`Derek Landy has been something of a publishing phenomenon.' Irish Post

`Skulduggery Pleasant: Dark Days is further proof that Landy is down with the kids. He understands what makes them tick and when it comes to action-packed mayhem, hilarious one liners and pure entertainment.' Inis

`This is smart, funny, contemporary fantasy that's up there with the best.' Readings.com

'Skulduggery Pleasant serves up a thoroughly satisfying blend of humour, magic and adventure. Once you've met Stephanie and Skulduggery, you'll be clamouring for a sequel.' Rick Riordan, author of the PERCY JACKSON series

`Landy's witty style will win him fans of all ages ... It's a good job Harry's [Potter] resigning before he's forcibly retired.' Irish Mail on Sunday

GOR002435937
Dark Days (Skulduggery Pleasant, Book 4) by Derek Landy
Derek Landy
Skulduggery Pleasant
Used - Very Good
Paperback
HarperCollins Publishers
2010-09-02
416
0007325975
9780007325979
N/A
Book picture is for illustrative purposes only, actual binding, cover or edition may vary.
This is a used book - there is no escaping the fact it has been read by someone else and it will show signs of wear and previous use. Overall we expect it to be in very good condition, but if you are not entirely satisfied please get in touch with us.