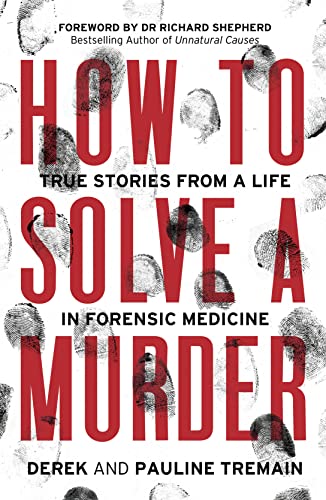 How to Solve a Murder by Derek Tremain

As gripping as it is gruesome, How to Solve a Murder is a fascinating insight into the career of a forensic scientist. Includes a foreword from Dr Richard Shepherd, bestselling author of Unnatural Causes.

How to Solve a Murder: True Stories from a Life in Forensic Medicine by Derek Tremain

As gripping as it is gruesome, How to Solve a Murder is a fascinating insight into the career of a forensic scientist. Includes a foreword from Dr Richard Shepherd, bestselling author of Unnatural Causes.

Not the usual tools of trade, but for Chief Forensic Medical Scientist Derek and Forensic Secretary Pauline they were just part of a normal day in the office inside the world-famous Department of Forensic Medicine at Guy's Hospital in London.

Derek has played a pivotal role in investigating some of the UK's most high-profile mass disasters and murder cases. Derek's innovative work on murder cases, in particular, has seen him credited as a pioneer of forensic medical science, after developing ground-breaking techniques that make it easier to secure a conviction and also identify a serial killer.

Warmly recalled and brilliantly told, these intriguing revelations will open your eyes to the dark world inhabited by those who investigate death and murder (typically most horrid), and unveil the secrets of how each case is solved.

Derek Tremain BSc (Hons) is Forensic Imaging Scientist & Managing Director Forensic Image Services. He began working at the age of 15 for Guy's Hospital in its historic Gordon Museum then moved into the dedicated Forensic Department. Over the next 35 years, he experienced thousands of patterned injuries, and is recognised to be the UK's leading experts in the area. Having created new histological techniques and analyse during the course of his work, Derek went on to found the UK's first injury body mapping service for murder trials. Today, Derek acts as an independent consultant.

Pauline Tremain is a former Medical Sectary and is now Forensic Graphic Designer and Business Manager of Forensic Image Services. She joined Guy's Hospital's forensic department in 1981. Her interest and enthusiasm was quickly acknowledged by the pathologist team, who included her in their routine mortuary attendances, where she took notes on post-mortems.

GOR011067902
9780008404888
0008404887
How to Solve a Murder: True Stories from a Life in Forensic Medicine by Derek Tremain
Derek Tremain
Used - Very Good
Paperback
HarperCollins Publishers
2021-01-21
320
N/A
Book picture is for illustrative purposes only, actual binding, cover or edition may vary.
This is a used book - there is no escaping the fact it has been read by someone else and it will show signs of wear and previous use. Overall we expect it to be in very good condition, but if you are not entirely satisfied please get in touch with us
Trustpilot