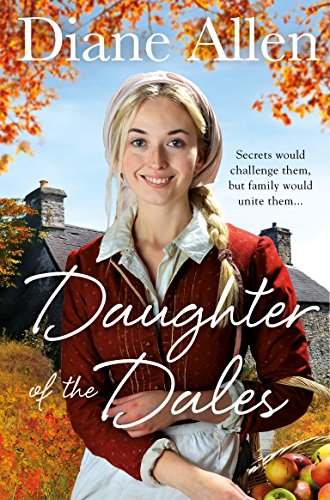 Daughter of the Dales
by Diane Allen

Daughter of the Dales Summary

Daughter of the Dales by Diane Allen

A moving Yorkshire saga, Daughter of the Dales is the much anticipated finale in Diane Allen's Windfell Manor Trilogy.

The death of the family matriarch, Charlotte Atkinson, at Windfell Manor casts a long shadow over Charlotte's husband Archie and her two children, Isabelle and Danny. With big shoes to fill, Isabelle takes over the running of Atkinson's department store but her pride - and heart - is tested when her husband James brings scandal upon the family and the Atkinson reputation.

Danny's wife Harriet is still struggling to deal with the death of their first two children - a death she blames Isabelle for. But Danny himself is grappling with his own demons when a stranger in town brings to light a long-forgotten secret from his past.

Meanwhile, Danny and Harriet's daughter Rosie has fallen under the spell of local stable boy, Ethan. But will he stand by her or will he cause her heartache? And can Isabelle restore the Atkinson reputation and her friendship with Harriet, to unite the family once more?

Daughter of the Dales Reviews

If you are a lover of historical sagas and the sweep of the northern hills and their romance, then this novel is definitely for you * Historical Novel Society *
An enthralling tale packed with emotion, drama and the harsh realities of life in 19th century northern England * Lancashire Post *

Diane Allen was born in Leeds, but raised at her family's farm deep in the Yorkshire Dales. After working as a glass engraver, raising a family and looking after an ill father, she found her true niche in life, joining a large-print publishing firm in 1990. She now concentrates on her writing full time, and has recently been made Honorary Vice President of the Romantic Novelists' Association. Diane and her husband Ronnie live in Long Preston, in the Yorkshire Dales, and have two children and four beautiful grandchildren.

GOR009373864
Daughter of the Dales by Diane Allen
Diane Allen
Windfell Manor Trilogy
Used - Very Good
Paperback
Pan Macmillan
2018-09-20
352
144729517X
9781447295174
N/A
Book picture is for illustrative purposes only, actual binding, cover or edition may vary.
This is a used book - there is no escaping the fact it has been read by someone else and it will show signs of wear and previous use. Overall we expect it to be in very good condition, but if you are not entirely satisfied please get in touch with us.