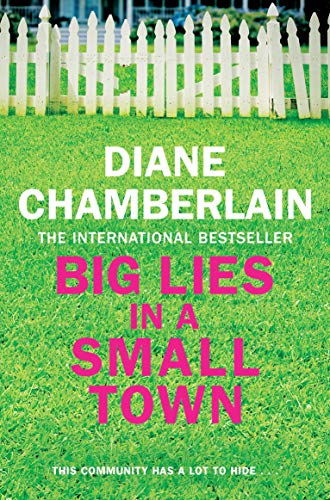 Big Lies in a Small Town
by Diane Chamberlain

Used Price
£4.99
New RRP £8.99
Free Shipping in the UK
Big Lies in a Small Town is a moving and emotional novel from the internationally bestselling author Diane Chamberlain.
Very Good

Big Lies in a Small Town by Diane Chamberlain

Big Lies in a Small Town, by the internationally bestselling author Diane Chamberlain, is a sweeping novel about two women connected by a painting that holds many dark secrets.

North Carolina, 2018: Morgan Christopher's life has been derailed. Taking the fall for a crime she did not commit, she finds herself serving a three-year stint in the North Carolina Women's Correctional Centre. Her dream of a career in the arts is put on hold - until a mysterious visitor makes her an offer that will see her released immediately. Her assignment: restore an old post office mural in a sleepy southern town. Morgan knows nothing about art restoration but, desperate to leave prison, she accepts. What she finds under the layers of grime is a painting that tells the story of madness, violence and a conspiracy of small-town secrets.

North Carolina, 1940: Anna Dale, an artist from New Jersey, wins a national contest to paint a mural for the post office in Edenton, North Carolina. Alone in the world and desperate for work, she accepts. But what she doesn't expect is to find herself immersed in a town where prejudices run deep, where people are hiding secrets behind closed doors and where the price for being different might just end in murder.

What happened to Anna Dale? Are the clues hidden in the decrepit mural? Can Morgan overcome her own demons to discover what exists beneath the layers of lies?

Chamberlain puts so much grit, emotion and drama into her books that it's impossible to stop thinking about the plot * Heat *
Totally amazing. I love Diane's writing -- Cathy Kelly
Diane Chamberlain's gift for storytelling never fails * My Weekly *
An excellent read that will be loved by her fans and anyone who enjoys reading -- Jodi Picoult

Diane Chamberlain is the bestselling author of numerous novels including Necessary Lies, The Silent Sister and Pretending to Dance. Her storylines are often a combination of romance, family drama, intrigue and suspense. She lives in North Carolina with her partner, photographer John Pagliuca, and her Shelties, Keeper and Cole.

GOR010742529
Big Lies in a Small Town by Diane Chamberlain
Diane Chamberlain
Used - Very Good
Paperback
Pan Macmillan
2020-08-06
496
1509808647
9781509808649
N/A
Book picture is for illustrative purposes only, actual binding, cover or edition may vary.
This is a used book - there is no escaping the fact it has been read by someone else and it will show signs of wear and previous use. Overall we expect it to be in very good condition, but if you are not entirely satisfied please get in touch with us.