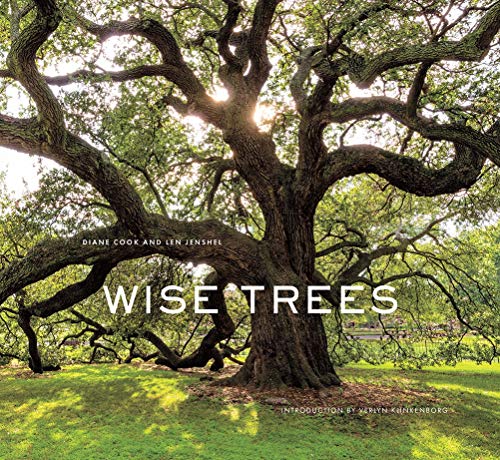 Leading landscape photographers Diane Cook and Len Jenshel present Wise Trees-a stunning photography book containing more than 50 historical trees with remarkable stories from around the world. Supported by grants from the Expedition Council of the National Geographic Society, Cook and Jenshel spent two years traveling to fifty-nine sites across five continents to photograph some of the world's most historic and inspirational trees. Trees, they tell us, can live without us, but we cannot live without them. Not only do trees provide us with the oxygen we breathe, food gathered from their branches, and wood for both fuel and shelter, but they have been essential to the spiritual and cultural life of civilizations around the world. From Luna, the Coastal Redwood in California that became an international symbol when activist Julia Butterfly Hill sat for 738 days on a platform nestled in its branches to save it from logging, to the Bodhi Tree, the sacred fig in India that is a direct descendent of the tree under which Buddha attained enlightenment, Cook and Jenshel reveal trees that have impacted and shaped our lives, our traditions, and our feelings about nature. There are also survivor trees, including a camphor tree in Nagasaki that endured the atomic bomb, an American elm in Oklahoma City, and the 9/11 Survivor Tree, a Callery pear at the 9/11 Memorial. All of the trees were carefully selected for their role in human dramas. This project both reflects and inspires awareness of the enduring role of trees in nurturing and sheltering humanity. Photographers, environmentalists, history buffs, and nature-lovers alike will appreciate the extraordinary stories found within the pages of Wise Trees! Also Available: Wise Trees (ISBN: 978-1-4197-2700-9)
"Ever looked at an old tree and wondered what it would say if it could talk? Just us? This fascinating photography book tells the story of 57 ancient and culturally significant trees from around the world." --Marie Claire

"Landscape photographers Diane Cook and Len Jenshel spent two years travelling to 59 locations across five continents to photograph some of the world's most historic trees. Their work is documented in the book, Wise Trees. While we pass many trees every day, we rarely stop to appreciate their beauty and significance. The book is an ode to trees - they can live without us, but we cannot live without them. Not only do they provide us with the oxygen we breathe, food gathered from their branches, and wood for both fuel and shelter, but they have been essential to the spiritual and cultural life of civilisations around the world. The book is thought-provoking and beautiful." Psychologies magazine
Diane Cook and Len Jenshel are two of America's foremost landscape photographers. For the past four decades their work has explored issues involving beauty, culture and the control of nature. Their previous books include Aquarium (2003), Hot Spots: America's Volcanic Landscape (1996), Travels in the American West (1992) and Charmed Places (1988), and they have had exhibitions at the Yokohama Museum in Tokyo, the Art Institute of Chicago, and the International Center of Photography in New York City. Their work is represented in more than one hundred major collections worldwide. They have been contributing photographers to the National Geographic for the past twenty years, and their work has also been published in The New Yorker, Harpers, The New York Times Magazine, Washington Post Magazine, Audubon, and many other magazines. They were married in 1983 and began collaborating in 1991. They live in New York City. Verlyn Klinkenborg is the author of six books: Making Hay (1986), The Last Fine Time (1991), The Rural Life (2003), Timothy: Or, Notes of an Abject Reptile (2006), Several Short Sentences About Writing (2011), and More Scenes From the Rural Life (2013). His articles and essays have appeared nearly everywhere. He has taught creative writing at Pomona College, Harvard, and Columbia, and is currently a member of the English Department and the School of Forestry at Yale University. He received a Guggenheim Fellowship in 2007 and was a member of the editorial board of the New York Times from 1997 to 2013. Mr. Klinkenborg lives in Manhattan and Columbia County, New York, with his wife, Alexandra Enders.
NPB9781419727009
9781419727009
1419727001
Wise Trees by Diane Cook
Diane Cook
New
Hardback
Abrams
2017-10-17
192
N/A
Book picture is for illustrative purposes only, actual binding, cover or edition may vary.
This is a new book - be the first to read this copy. With untouched pages and a perfect binding, your brand new copy is ready to be opened for the first time
Trustpilot